Can ADHD Cause or Worsen Clinical Depression?

Millions of children, teens, and adults have major depressive disorder, with 6.7% of the U.S. population experiencing a depressive episode each year. Depression is one of the most common mental health disorders in the world, and while there is no single cause of depression, several factors can influence the manifestation of symptoms. Biological, genetic, temperament and environmental factors can cause someone to develop depression.

People who have a chronic, physical health condition or a learning disability are at higher risk of becoming depressed. Patients with ADHD, or attention deficit hyperactivity disorder, have higher rates of depression than the general population. But is ADHD the cause of depression? And can treating depression lessen the symptoms of ADHD? The following article will explore how these conditions are linked and how they are treated and managed.

Attention deficit hyperactivity disorder is a learning disability that is primarily diagnosed in childhood. There are about 3 million new cases of ADHD diagnosed each year. People with ADHD are never “cured” of the disorder, for it is a chronic and lifelong condition. However, with early intervention, medication, and customized therapy, patients can go on to live a life free from the debilitating symptoms of ADHD. 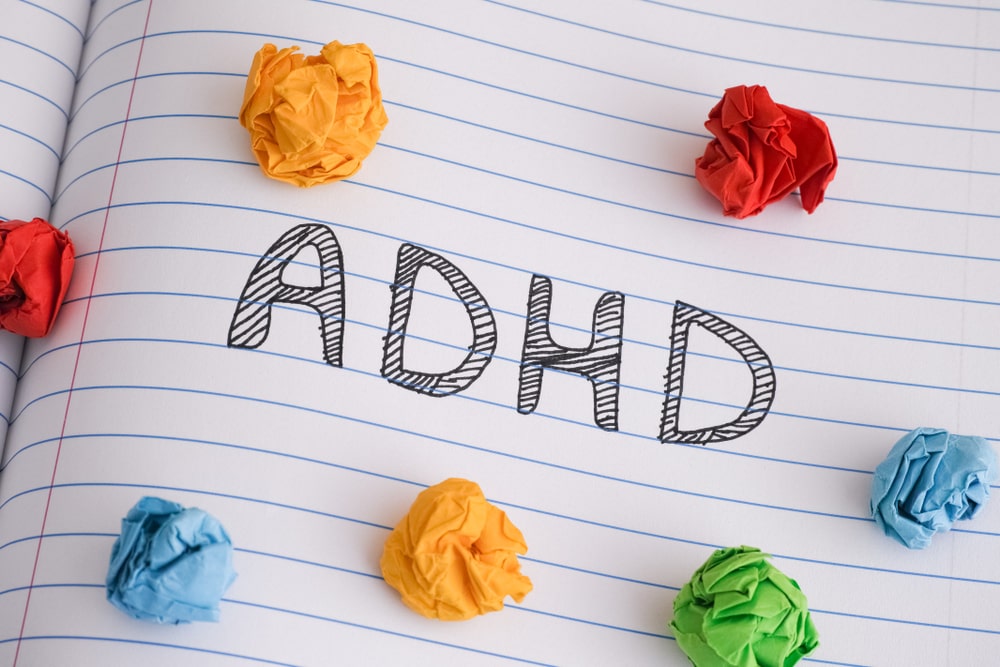 What are the symptoms of ADHD?

People with ADHD have trouble focusing, sitting still, learning, and have difficulty managing their impulse control. ADHD that is left undiagnosed and untreated can cause significant impairment in a person’s life. They will have trouble in social situations, and their symptoms can alienate them from their peers and strain their relationships.

Children with ADHD have extreme difficulty in the classroom. Without outside intervention, they can fail to progress in school and suffer a range of consequences as they age. They risk dropping out of school, becoming impoverished as adults, and they may get into trouble with the law. Untreated ADHD also puts a person at higher risk of taking drugs or alcohol to find relief from their symptoms which frequently result in depression.

A combination of genetic and physiological factors cause ADHD. In brain imaging scans of ADHD patients, the brain structure of those with ADHD is different than a neurotypical brain. Parents and educators may notice the signs of ADHD when their child is very young. However, it is normal for small children to have trouble with impulse control and focus. As children age, these skills will develop little by little.

Adults with ADHD are treated in a similar fashion. However, when an adult suffers debilitating ADHD they can feel alienated from society, frustrated with simple tasks, and wind up with severe depression as a result. Depression and ADHD can be seen paired together more frequently in adults than children. These disabilities need to be treated simultaneously in order to overcome them. If one symptom is treated but not the other, frequently no sustainable progress will have been made.

How is ADHD treated?

People with ADHD have a different brain structure, and therefore need different instruction to learn, and problem solve effectively. ADHD is treated with a combination of therapy medications to help the person stay calm and focus. Behavior therapy and family support help people pay attention and learn in school or the workplace, and trained therapists can coach and teach people how to develop their social and emotional skills.

It’s true that untreated depression can go away on its own. Depression often happens in waves or episodes, which can last for weeks, months, or sometimes years depending on the subtype. The issue is, a patient and their loved ones cannot predict how bad the episode will get. At its most severe, depression can lead to suicide. Although it is a severe condition, depression is highly treatable with therapy and medication, or transcranial magnetic stimulation.

How are ADHD and depression linked?

People with ADHD can have a tough time controlling their impulses. Their symptoms can quickly alienate them from their peers, educators, and family members. The symptoms of ADHD and the consequences of those symptoms can be embarrassing, and people with ADHD may feel ashamed, and they are often the subject of bullying or ostracization at school. Trouble concentrating and focusing in school can lead to academic failure, and adults with ADHD may have difficulty holding down steady employment. Not being able to progress at work or in school can cause self-esteem issues.

While ADHD and depression are two different disorders, they are linked in some ways. The consequences of ADHD can cause depression symptoms, such as low self-esteem, and feelings of guilt or social isolation. In people who are already otherwise susceptible to getting depression, the consequences of unmanaged ADHD can trigger an episode in a vulnerable person. Adults with ADHD are at higher risk of having a mood disorder like depression than the general population.

How are ADHD and depression treated?

Both of these conditions are chronic and lifelong. There is no single cure for either ADHD or depression, but these conditions can be successfully managed with specialized care and ongoing treatment. The earlier clinicians can intervene, the better the outcome will be for the patient. Children with ADHD often need school support and family education so that they can get the care they need at home and school. Adults need similar treatment but need to be aware of the risk that depression can pose on their ADHD. Depression can be successfully treated with a combination of different therapies and sometimes medication. Depression can be treated with deep brain stimulation techniques.