A History of Obsessive Compulsive Disorder 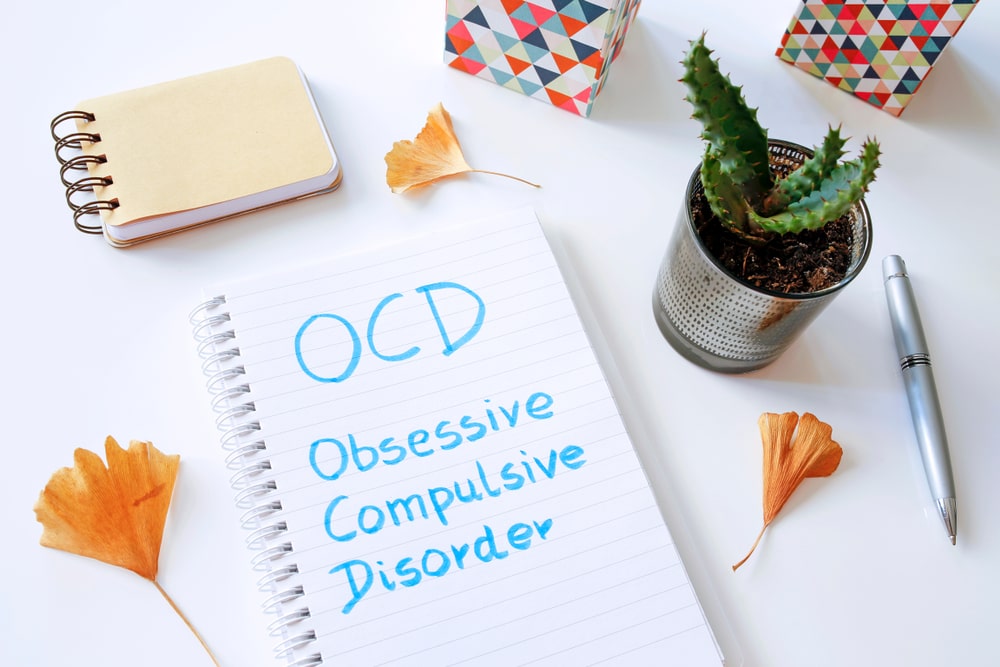 Obsessive-compulsive disorder, or OCD, is a severe and disabling anxiety disorder that affects more than 2 million adults in the U.S.

It is believed that a combination of genetics, temperament, and life stressors can trigger OCD in susceptible individuals. OCD affects women and men in equal numbers, and most people will start to exhibit the symptoms of OCD as children or adolescents. 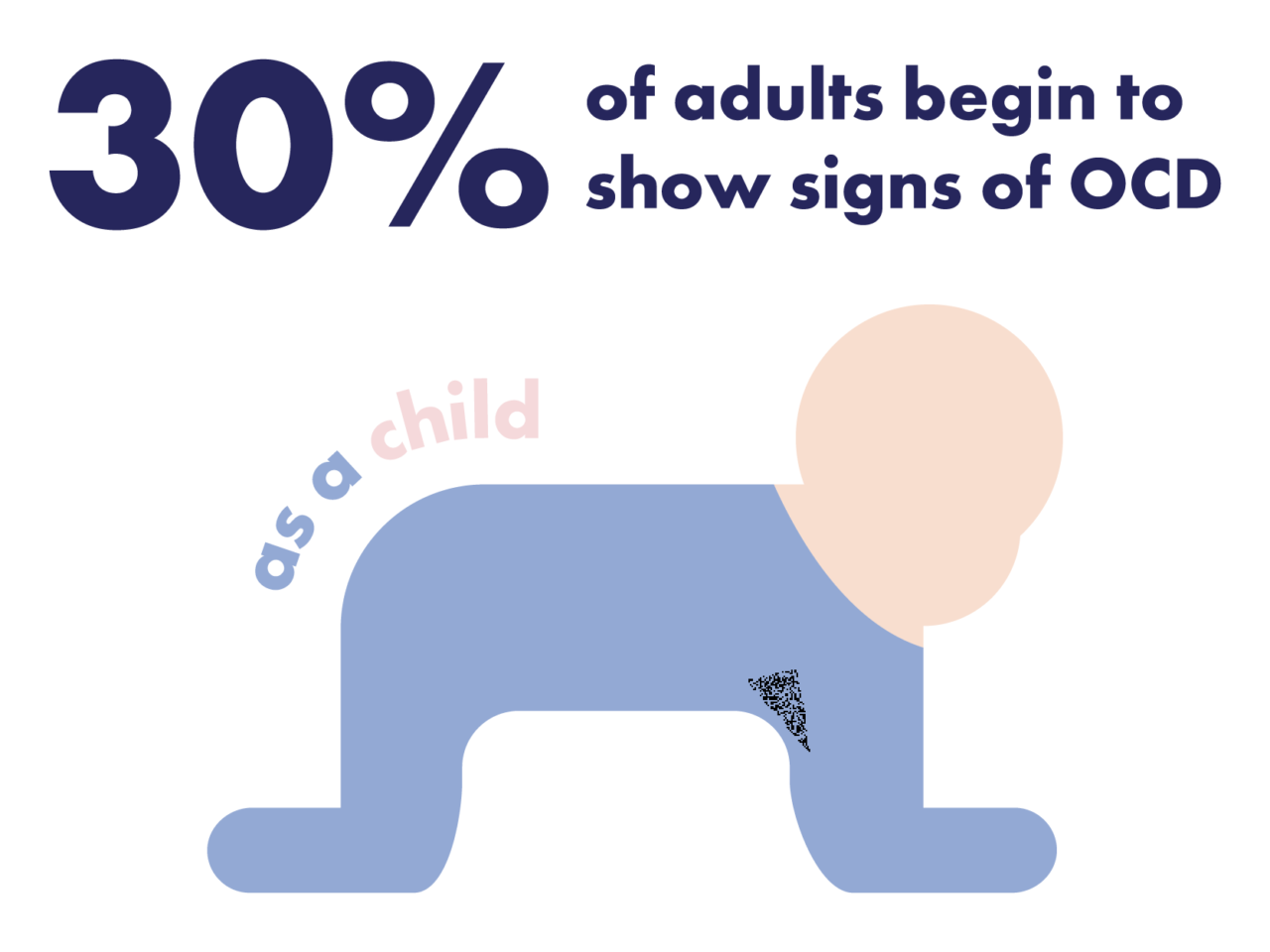 Around 30% of all adults diagnosed with the condition began to show signs of the disorder as young children. The condition can be so debilitating that it is among the top twenty causes of disability in the world.

Most people with OCD receive a diagnosis by the time they turn 19, but some people may not be diagnosed until later in life, after 35. 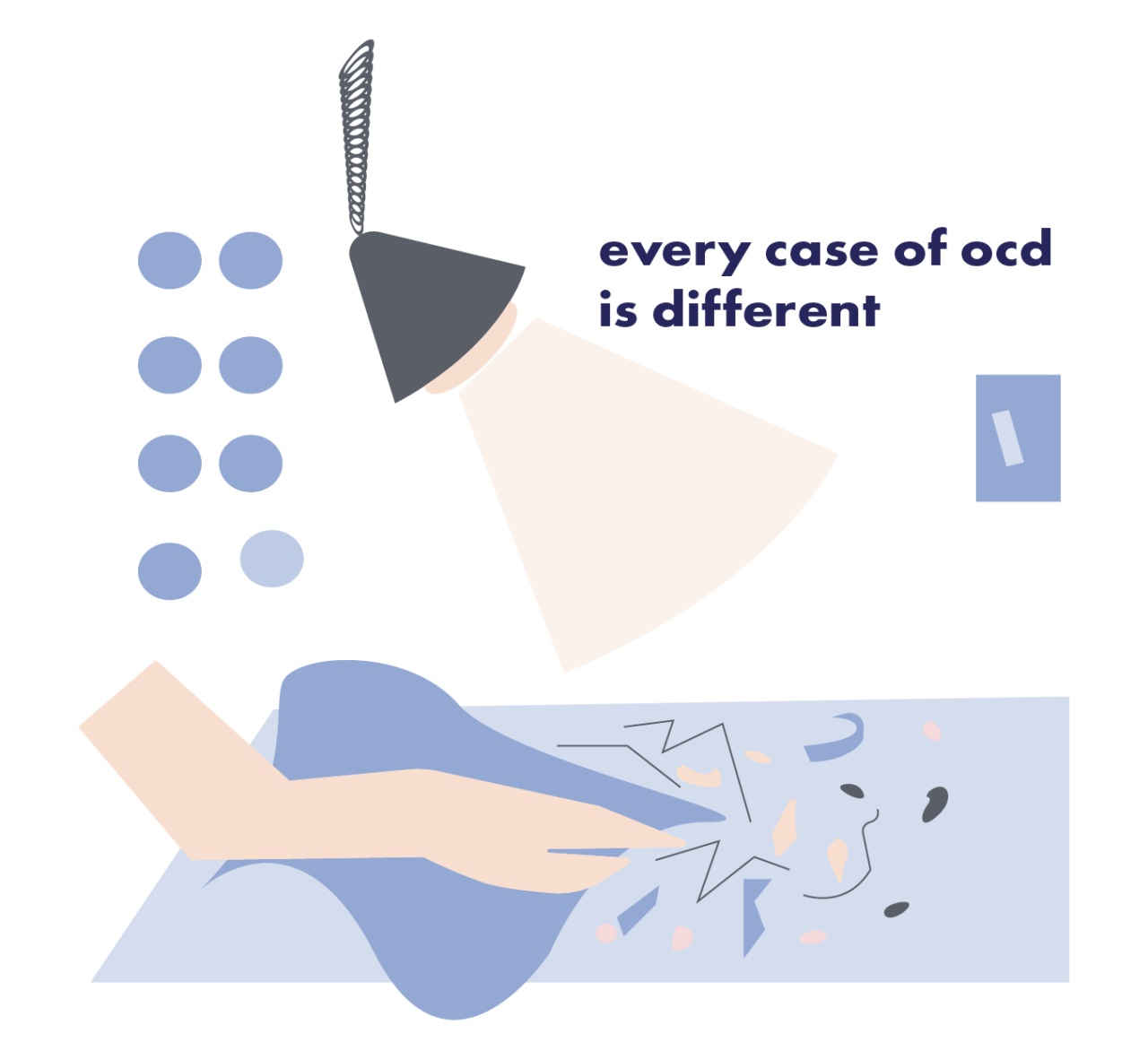 People with OCD will display a cluster of symptoms that can range in severity, and every case of OCD is different. The disorder is characterized by a combination of obsessions and compulsions that make it difficult for sufferers to function in their daily lives. The most common obsessions that people with OCD have are obsessions about germs and contamination. 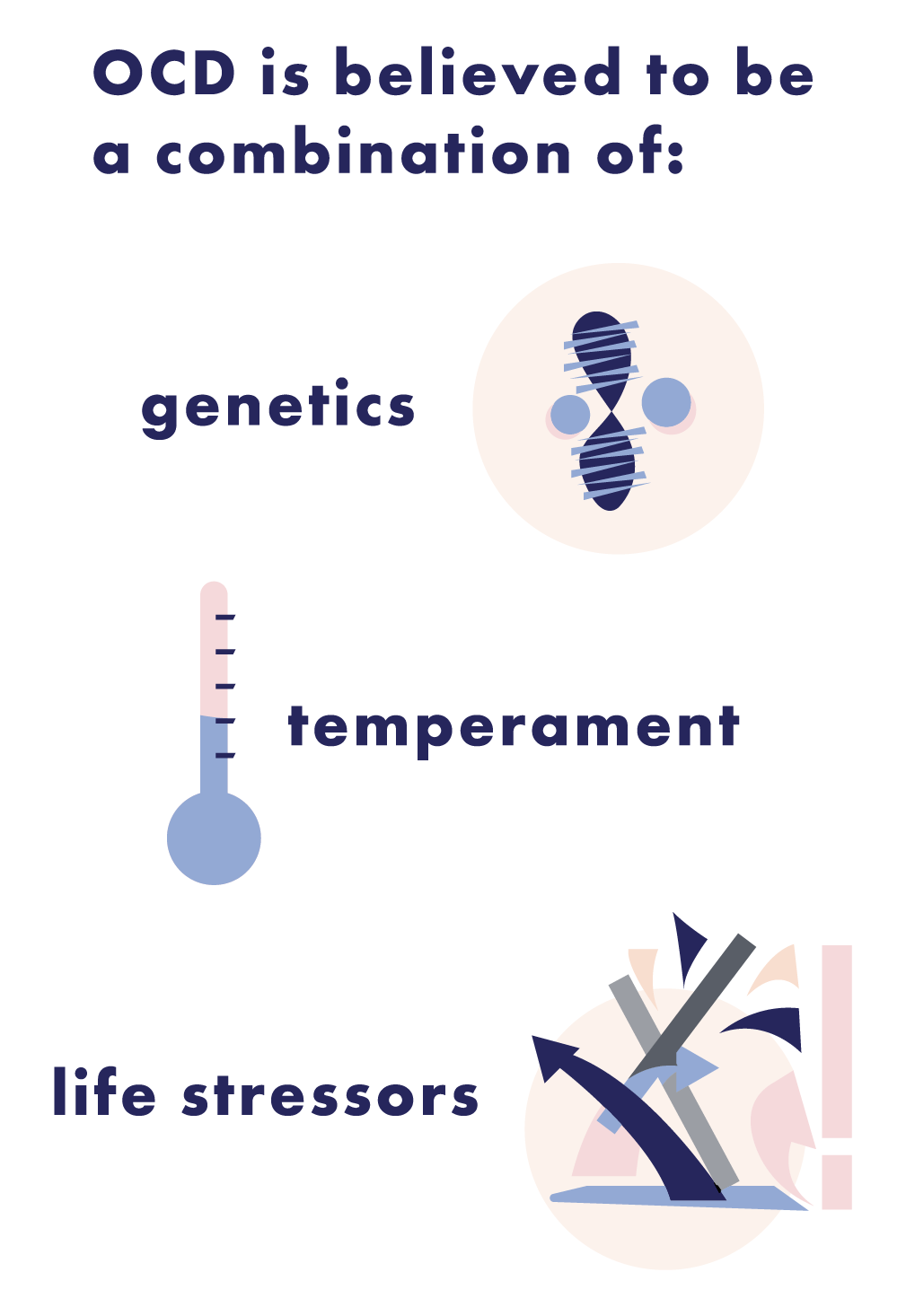 For example, a person with OCD may be anxious about touching doorknobs for fear of becoming contaminated with germs or becoming sick. To lessen their fear and anxiety, a person with OCD may compulsively wash their hands several times, for a specific amount of time after they touch a doorknob. People with OCD can’t stop engaging in compulsions even when it begins to disrupt their lives severely or starts creating adverse consequences for them. In the case of someone fearful of contamination, they may rub their skin raw from washing their hands so frequently.

OCD symptoms can vary significantly from one person to the next, and obsessions and compulsions can be as varied as the people who suffer from OCD. While one patient may have an obsession or extreme fear of contamination, another person may be obsessed with spiritual cleanliness. They may compulsively pray or offer other religious supplications to quell their anxiety. Anxiety disorders like OCD have been in existence for centuries, and until the modern era, sufferers had few options to manage their symptoms effectively.

While it is difficult to determine an exact cause of OCD, experts believe several risk factors make a person more likely to develop this condition. For example, genetics likely play a role in OCD development because people who have close relatives, such as a parent or sibling, with the disorder are more likely to develop it. There is additional evidence that people with OCD have some abnormalities in brain structure, and environmental issues like childhood trauma are also related to OCD.

Additional research suggests that prenatal risk factors, such as maternal smoking during pregnancy, premature birth, and complications during labor and delivery increase the risk of OCD. Studies have also suggested that females may be susceptible to developing symptoms of OCD during pregnancy or postpartum, as well as after beginning their menstrual cycles, during menopause, or following a miscarriage. Additional risk factors identified in the research include parenting practices, with individuals who experienced parental rejection or parental overprotection sometimes being more likely to develop OCD. Finally, stressful and traumatic life events and repeated stress seem to be linked to OCD.

While studies have found multiple risk factors associated with OCD, the reality is that no one knows for certain what leads a person to develop this condition. Risk factors give an idea of why some people may develop OCD while others do not, but studies can sometimes be inconsistent. Generally, it is not one single factor, but rather a combination, that leads to a mental health condition like OCD.

Updated Statistics as of  May 2021

According to prevalence data, around 2.3 percent of American adults will experience OCD during their lifetimes, which is equal to over 3 million people affected.

Within a given year, OCD prevalence is higher among younger compared to older adults, with the following rates of OCD seen among various age groups:

When, where, and how was OCD discovered?

The term, obsessive-compulsive disorder, is a modern medical term from the 20th century. Before, people with OCD were thought to have a condition called “scrupulosity.” The earliest records of scrupulosity or OCD date back to religious texts, not medical records from the fourteenth through the eighteenth centuries. At that time, most OCD features were centered around obsessions and compulsions about religious beliefs and practices. In the late seventeenth century, scrupulosity symptoms were sometimes attributed to signs of “melancholy,” or what’s now known as depression.

During the seventeenth and eighteenth centuries, physicians would attempt to cure obsessive, distressing thoughts, and compulsions with bloodletting as a technique to adjust the bodily humors that were thought to play a role in symptom manifestation.

For centuries, medical opinion centered around the idea that certain bodily fluids, called humors, were responsible for a person’s emotions and behaviors. Blood was one of the humors that was thought to play a role in OCD. By changing the level of particular humors in the body through bloodletting and other means, it was believed to improve the patient’s mood or actions. 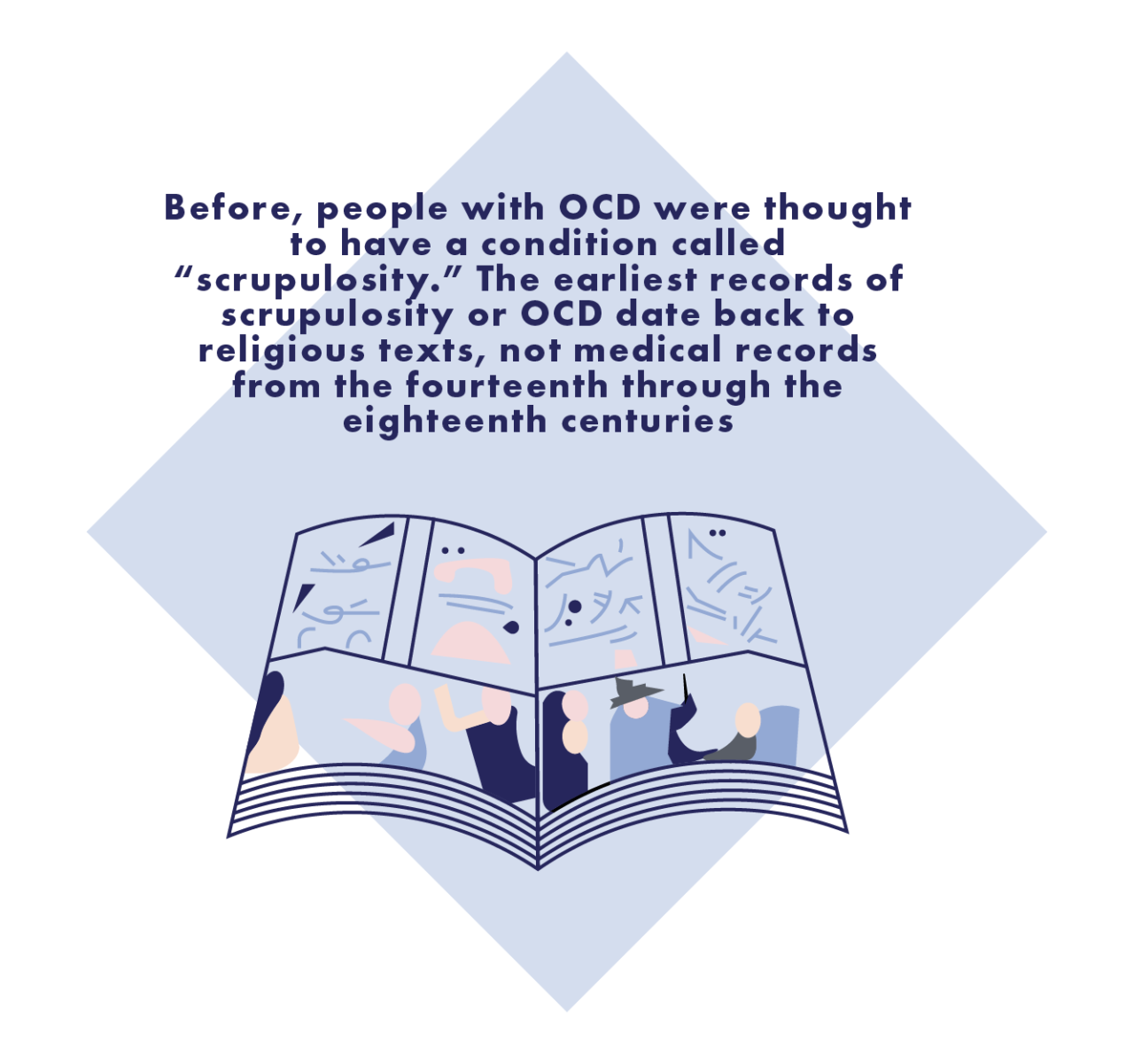 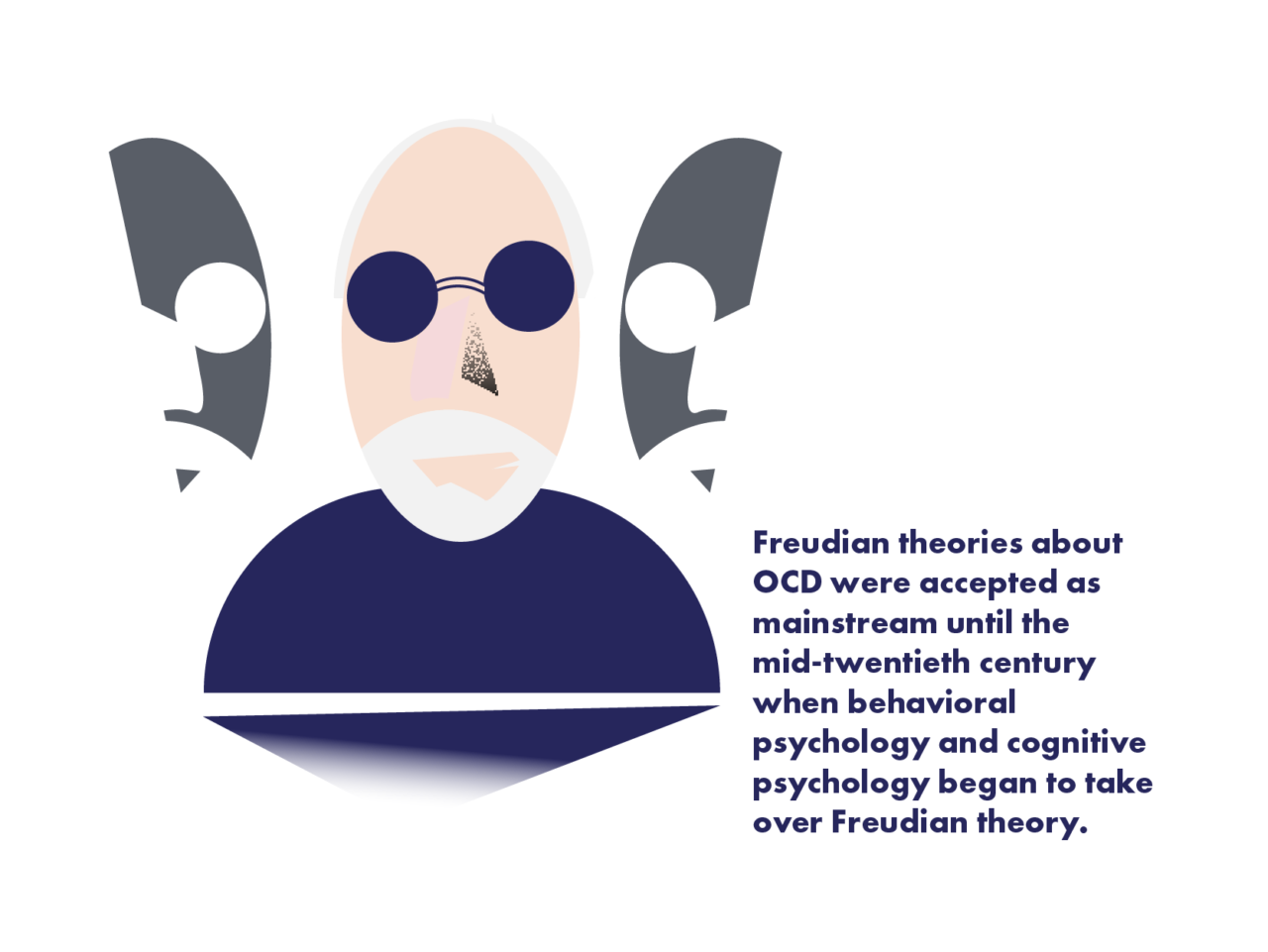 Toward the end of the eighteenth century and going into the nineteenth century, clinicians started to note that the patient’s obsessive thoughts began to center around fears of biological contamination and aggressive and distressing sexual thoughts. Obsessions surrounding religious fears and anxieties became less commonplace. At the time, physicians were divided on whether OCD had its origins in emotional issues, problems regarding a person’s willpower or self-control, or if they were indicative of an intellectual defect.

Throughout the late 1800s and into the 1900s, Freudian schools of thought began to dominate the field of psychology and mental healthcare. At the time, Freud was not able to identify what triggered a person’s obsessions but theorized that a person’s ambivalent feelings of love and hate toward themselves and others might have something to do with the symptoms of the disorder. Freudian theories about OCD were accepted as mainstream until the mid-twentieth century when behavioral psychology and cognitive psychology began to take over Freudian theory. Cognitive and behavioral psychology are the main models for treating and understanding the disorder today.

How has treatment for OCD evolved?

Toward the end of the 1800s, OCD was starting to be treated with more humane methods, which mostly included forms of psychotherapy and talk therapy that were popular in Freudian psychology.

Perhaps the most popular case in OCD history, treated using Freudian methods, was Mr. Ernst Lanzer, who was treated by Sigmund Freud himself, beginning in 1907. Lanzer became known as the “Rat Man,” as he had developed an irrational fear that his father and girlfriend would suffer from rats entering their anal cavities. To cope with this fear, Lanzer engaged in compulsions, namely counting and praying. Lanzer’s condition was so debilitating that he had difficulty focusing on his studies in law school, and Freud diagnosed the patient with what he called “obsessional neurosis.” Freud conducted psychoanalysis with Lanzer, tracing his fears back to unresolved childhood issues and repressed sexual desires. Freud claims that his method was successful for treating Lanzer, but his treatment methods have lost some popularity over time.

After Freudian theory lost its place at center stage, OCD treatment continued to evolve, with behavioral therapy becoming more common for treating symptoms of OCD. Freud’s psychoanalytic theory has received some criticism, but even so, some therapists today have reported that clients with OCD do just as well with psychoanalytic methods as they do with SSRIs medications or behavioral therapy.

In the 1960s and 1970s, talk therapy was still the most common treatment option for OCD. Talk therapy started to evolve to comprehensive and personalized forms of cognitive and behavioral therapy. Today, OCD is mostly treated with a combination of cognitive behavioral therapy, or CBT, and sometimes medications for anxiety and depression. In treatment-resistant cases, transcranial magnetic stimulation is sometimes used to lessen symptom severity and induce remission of symptoms when medication and CBT do not work. 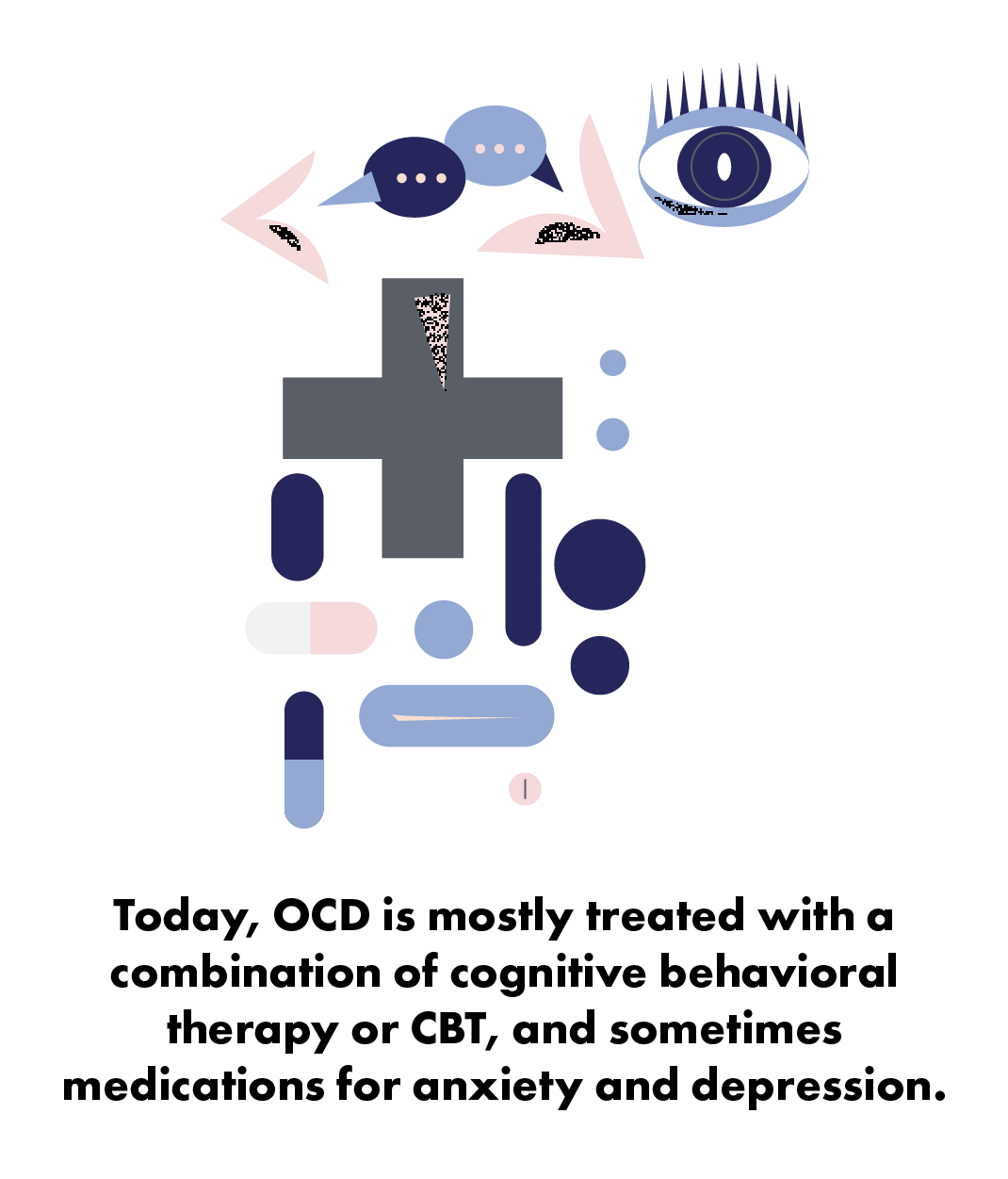 What are the latest treatment options for OCD?

Treatment for OCD has significantly evolved from the days of bloodletting. The first line of treatment for OCD is typically a combination of CBT along with medications for anxiety.

CBT is a type of talk therapy that can be broken down into more specific treatment subtypes. For OCD specifically, the CBT therapy Exposure and Response Prevention, or ERP, is the most effective. ERP is typically administered on an outpatient basis, where patients meet with a licensed therapist once or twice per week for about an hour for each session. 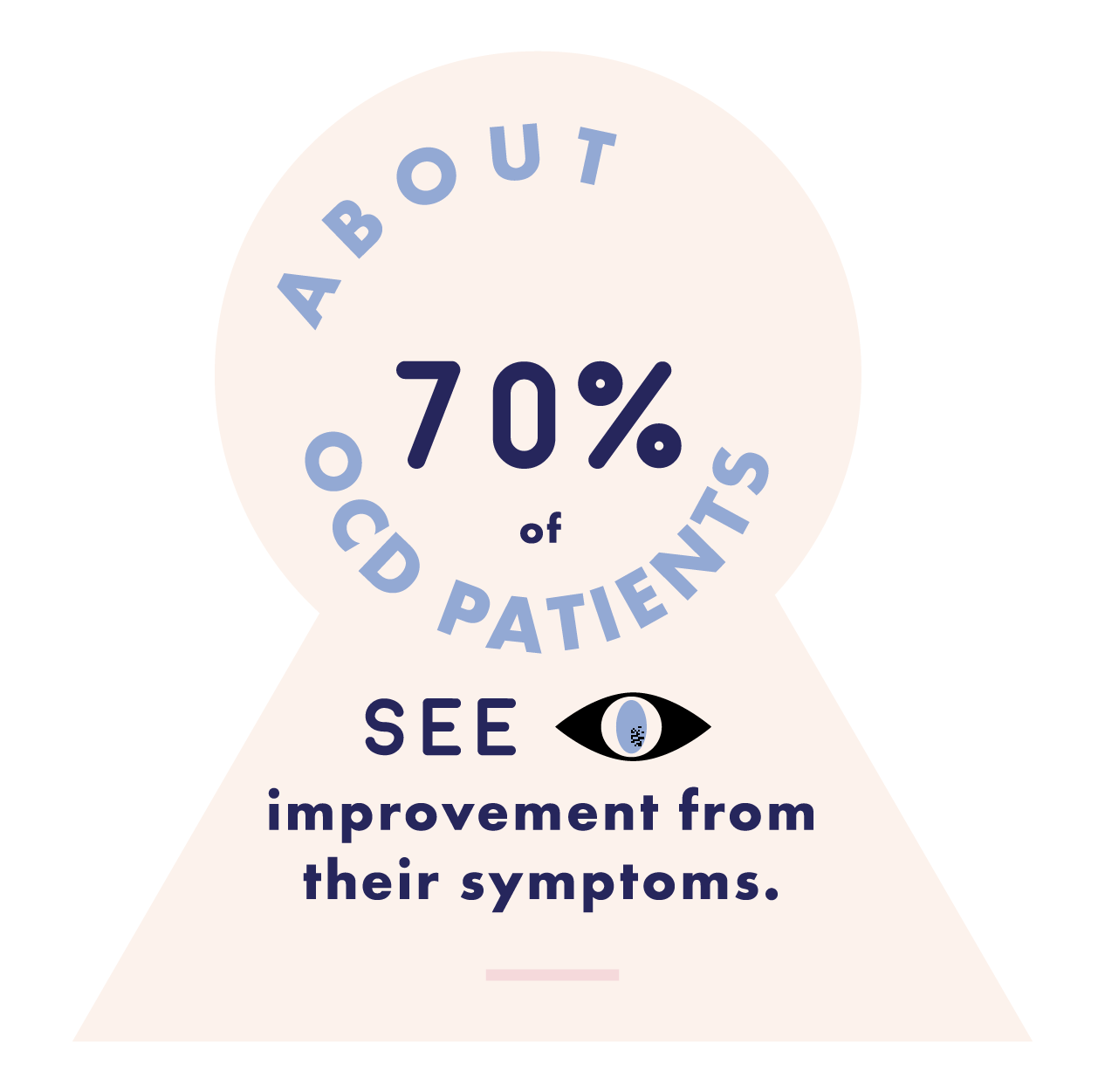 Ideally, a prescribing physician will work closely with a patient’s therapist to determine the best medication for the patient’s specific needs. About 70% of OCD patients see a significant improvement in their symptoms from this first line of treatment. For the remaining 30%, there are many treatment options available.

Patients who aren’t seeing any improvement with outpatient care can attend day programs, where they can attend group and one-on-one therapy for most of the day up to five days per week. Patients can live at home, but attend therapy for more extended, and frequent periods until they see an improvement in symptoms.

Another option is partial hospitalization. This option is similar to a day program, but the patient attends treatment in a mental health hospital. Here, they have access to a larger pool of mental health professionals and therapists. Patients still live off-campus.

The final two options if outpatient therapy doesn’t work for patients is to participate in either a residential or inpatient treatment program. Residential programs allow patients to live voluntarily in a treatment unit in a hospital.

When did FDA approve TMS for OCD treatment?

Not everyone with OCD will respond to medication and therapy alone for the condition. Sometimes, medications for OCD can have unpleasant side effects. For these patients, TMS is a safe and FDA-approved option for treating OCD.

TMS was developed in the 1980s. In 2008, the technique was approved for treating depression. It wasn’t until 2018 that the FDA approved TMS explicitly for treating OCD.

TMS is a non-invasive procedure where patients are awake for treatment. A strong, magnetic coil is placed over areas of the patient’s head, and powerful magnetic pulses are used to stimulate parts of the brain that are thought to play a role in OCD symptoms. Patients can return to work or school after receiving TMS treatment. The average TMS patient will undergo between 20 and 30 TMS sessions, and each session lasts for about one hour.

How effective is TMS for OCD?

In studies on OCD patients and TMS, 38% of the patients saw a reduction in OCD symptoms, with the average patient seeing a 30% reduction in symptom severity and frequency. 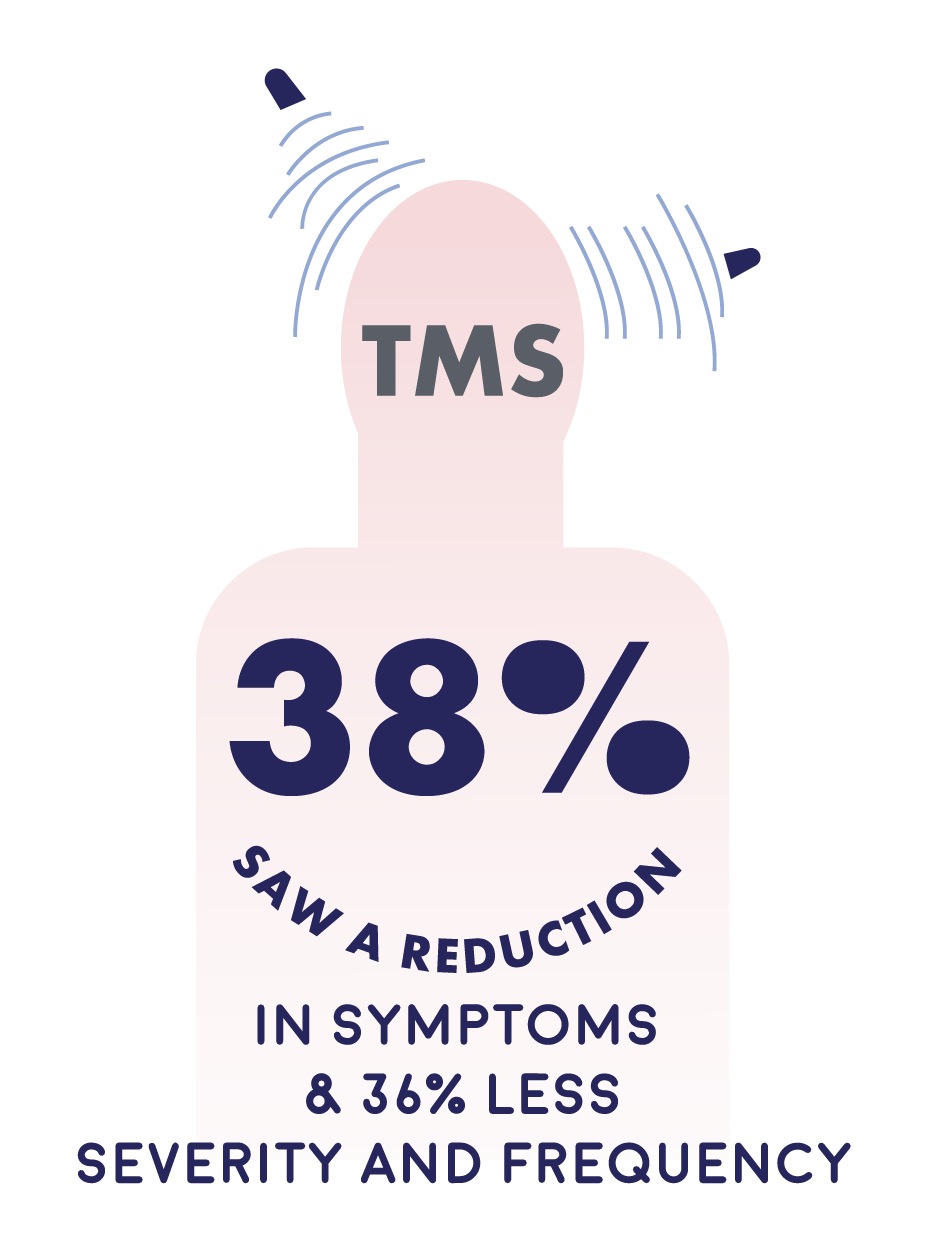 The most common side effect of TMS treatment is a headache, and some patients will experience mild jaw pain, facial muscle tension, and muscle twitches. No serious adverse reactions have ever been reported with TMS. The minimally invasive nature of TMS, coupled with the mild side effects, make it an attractive treatment option for OCD patients who can’t use medication or who don’t respond to medication treatment. 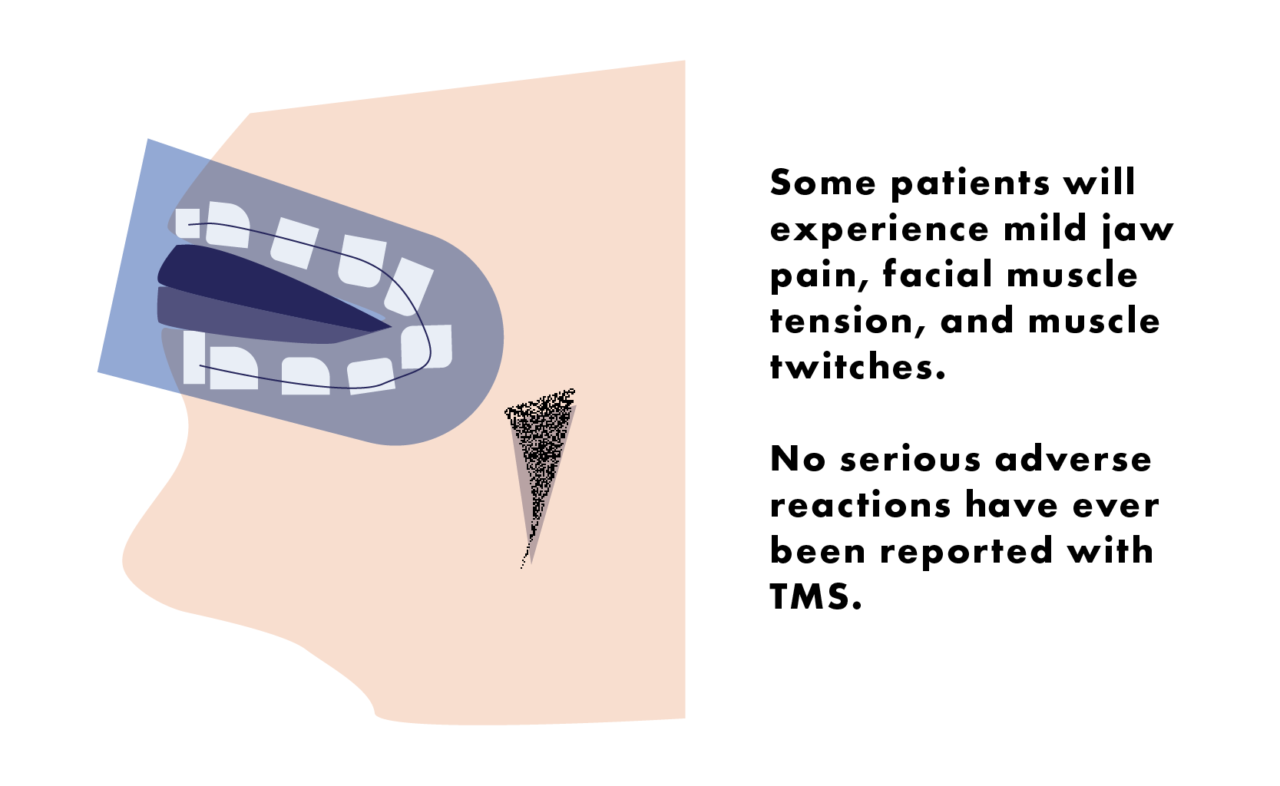 If you or someone you love is struggling with OCD symptoms despite taking medication, TMS can help alleviate symptoms with minimal side effects and disruption to your daily routine. Please contact the experienced and knowledgeable technicians at Pulse TMS today to learn more about this effective, safe, and cutting-edge treatment method.

Be aware, be safe, and be well.
Related Material