Depression is a severe and common mental health disorder, affecting over 300 million people across the globe. Since the 1990s, depression has been the third leading cause of death. But by 2020, the World Health Organization estimates that depression will be the second leading cause of death. Increasing rates of depression, anxiety, and suicide are in direct correlation to higher rates of internet and social media use.

While depression can strike anyone, certain genetic, temperamental, and situational factors can make someone more susceptible to developing depression. Women are at twice the risk of getting depression than men, and depression rates have steadily risen amongst all segments of society.

However, depression rates in recent years have increased the most in children, teens, and young adults. While those in middle age have historically been more likely to receive a diagnosis, younger demographics are catching up. In 2005, teens with depression, those ages 12 to 20, was 8.7%. By 2014, that number had risen to 11.5%, a 37% increase in less than ten years.

The scientific and medical communities have been studying the reasons for the rise in depression rates among young people. Symptoms of depression in teenagers include the following: 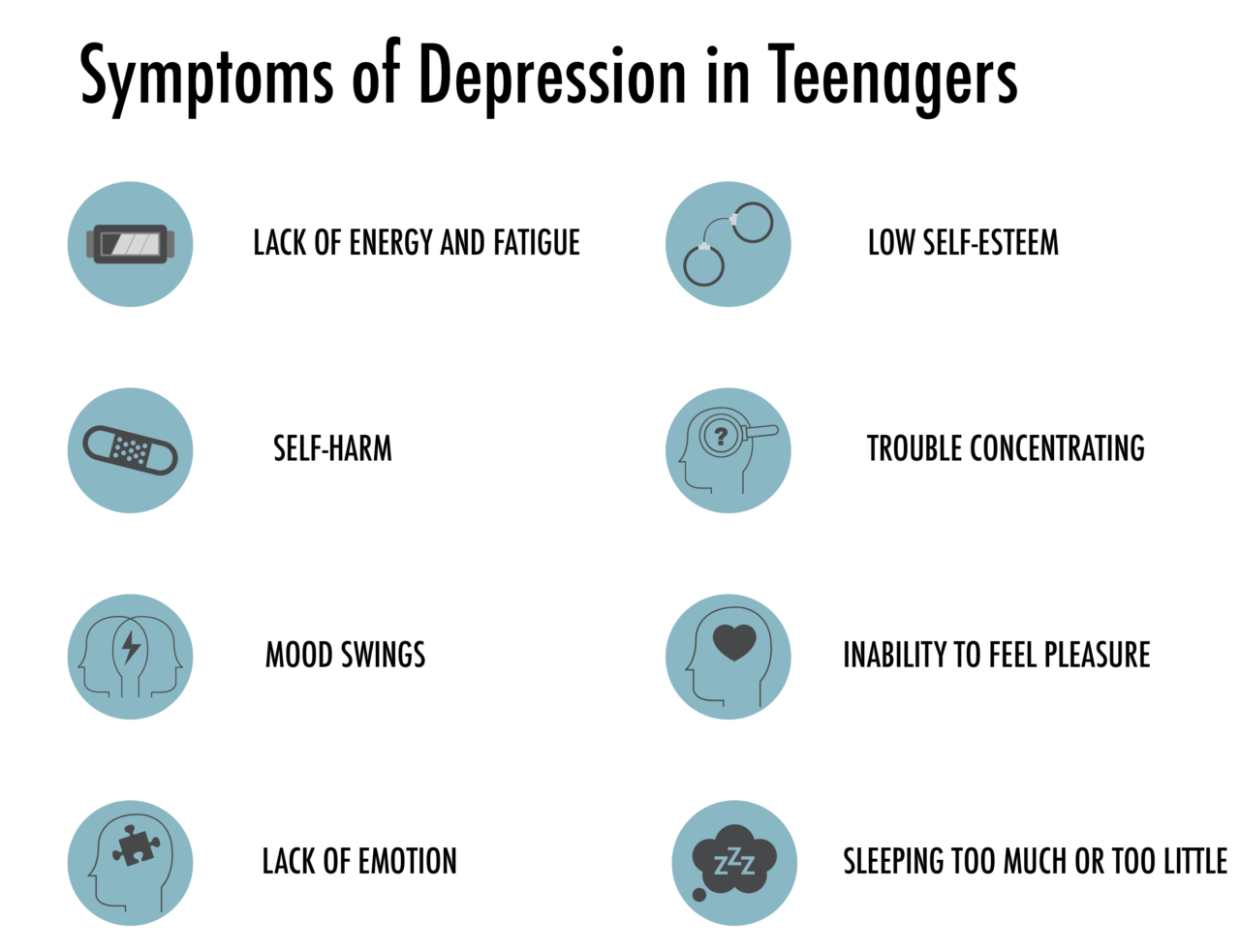 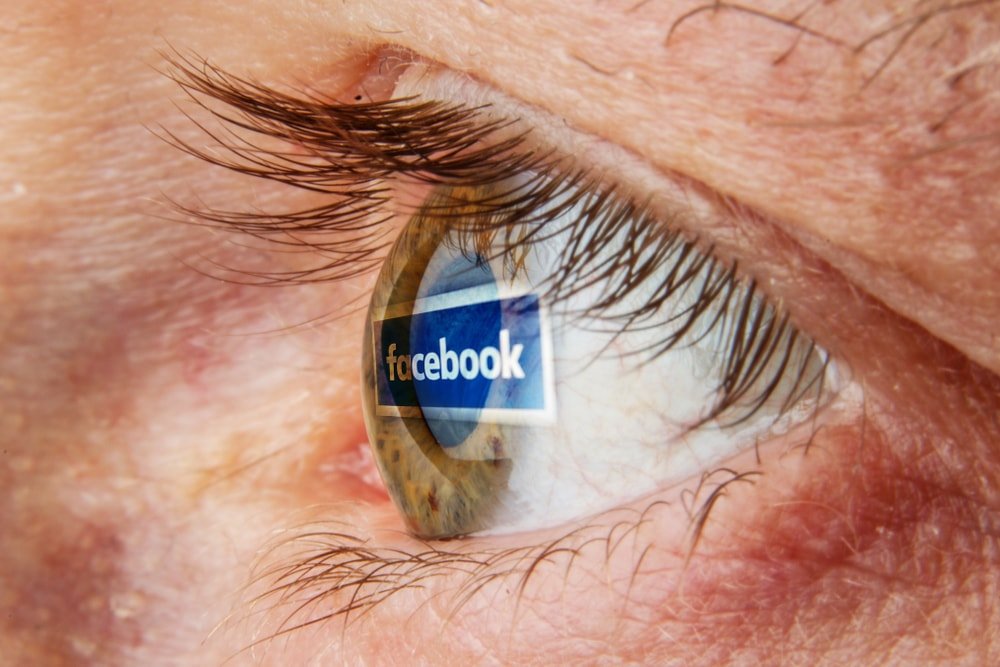 Increased social media and internet use has been directly linked to incidences of teen suicide. Teenagers are especially vulnerable to the negative aspects of social media, such as cyberbullying and cyberstalking. Teens do not have the maturity or foresight to deal with these complex and potentially dangerous issues. Without adequate parental involvement and monitoring, teens are at risk of experiencing depressive symptoms as a result of their time and experiences on social media and the internet.

While drug abuse rates may not correlate with increased diagnosis of depression, the use of social media and the more frequent incidences of cyberbullying may be linked to increased rates of depression. 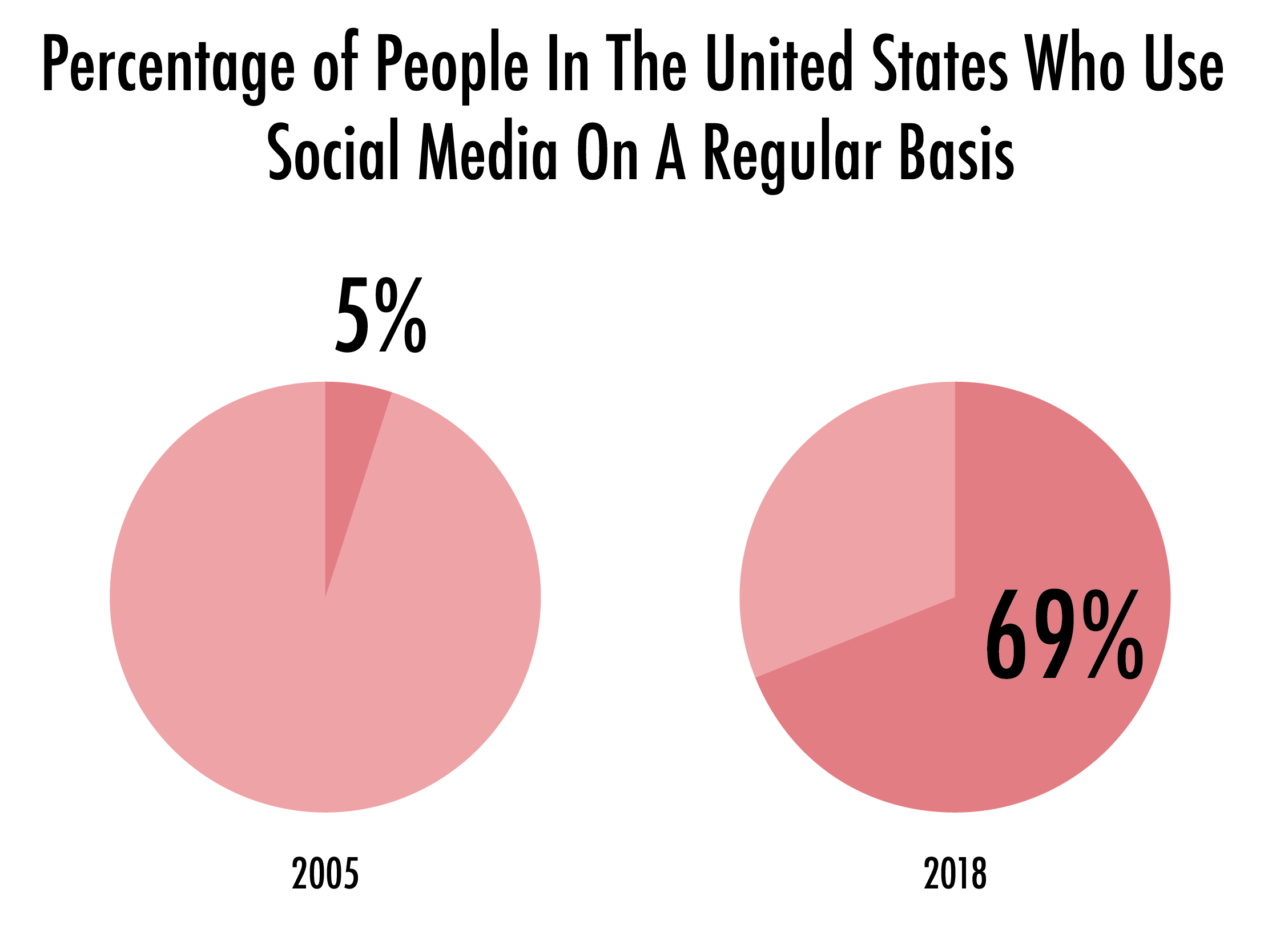 Social media use is about the same amongst white, black, and Hispanic demographics, but women are more likely to use social media, and adults with incomes in the 75K range and upwards have the highest use rates. College graduates and people who reside in urban settings tend to use social media more than their suburban and rural counterparts.

How are depression and social media linked?

Studies indicate that depression and increased social media use among different platforms can increase the chances of triggering a depressive episode or make a current episode worse.

Multiple social media platform usage is the strongest predictive factor in developing depression, not necessarily the amount of time spent on social media. 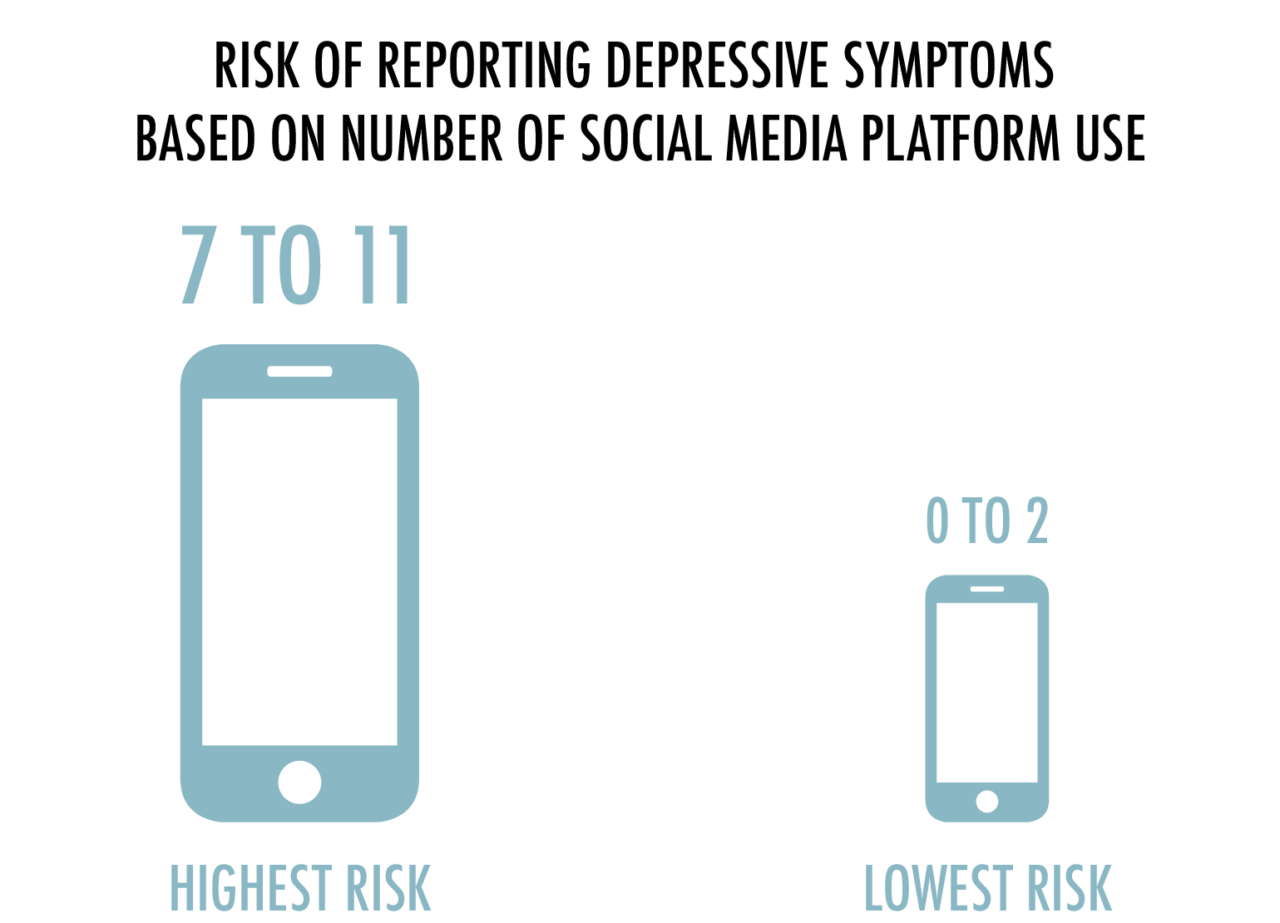 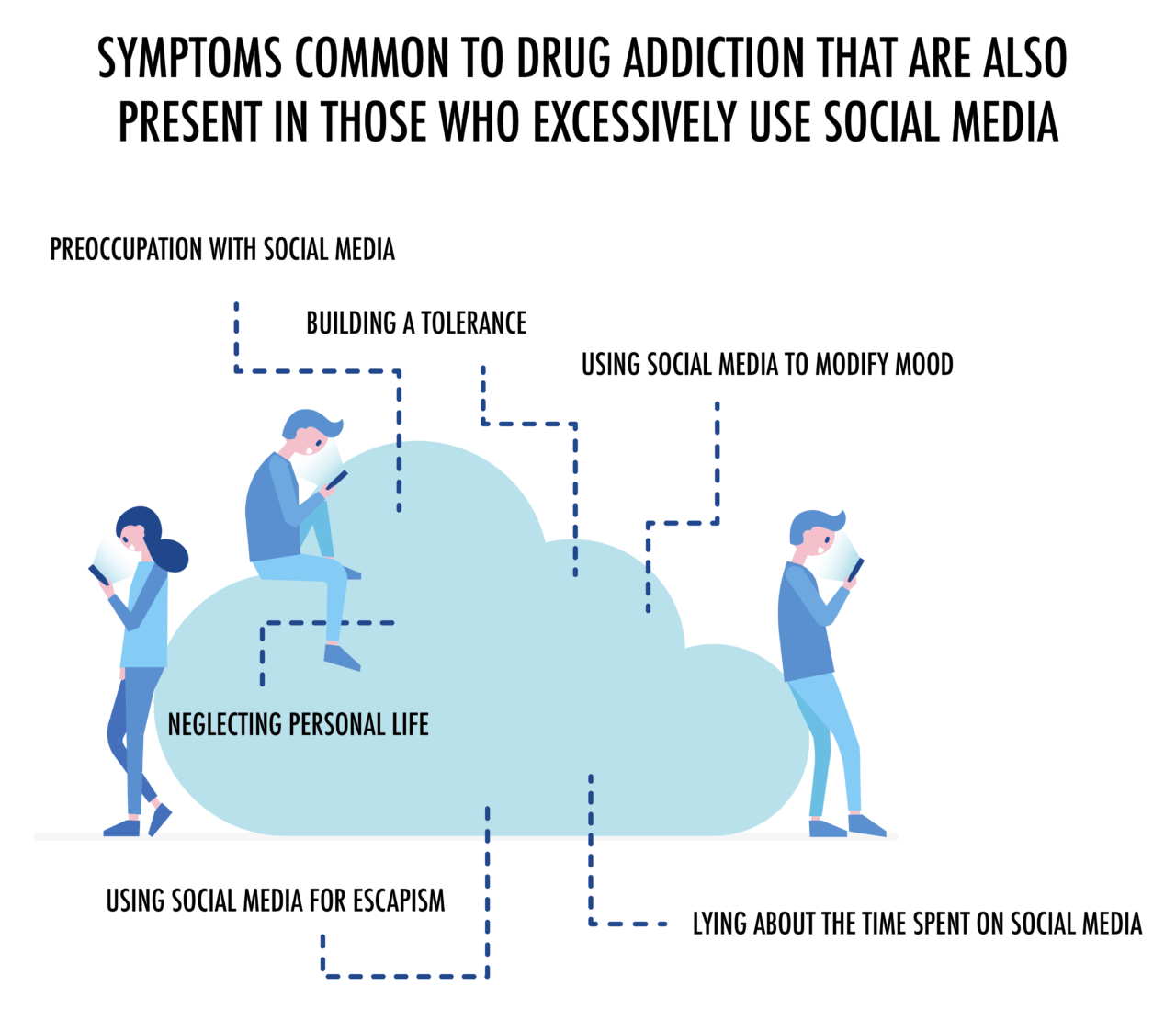 Studies also confirm that people undergo withdrawal symptoms when experiencing the internet, not just social media, addiction. Small, physiological effects are noted in people who get treatment for internet and social media addiction, such as anxiety, cravings to use, trouble sleeping, and depression.

Comorbidity is common in abuse and addiction. It is often difficult for doctors to determine whether someone is self-medicating an underlying mental health condition with a substance or activity. But, it’s also possible that addiction could have triggered a person’s mental health condition. Internet and social media addiction are no different. In some cases, people may use the internet as a form of escapism from distressing psychological health disorder symptoms.

Research conducted on internet and social media addiction find that denial is a substantial component of the disorder, similar to that seen in drug and alcohol addiction. People who are addicted to social media report feeling worse about themselves and life in general once they use it, but before going to use it, they think it will improve their lives despite all evidence to the contrary. This is a standard component of drug addiction, too, where people believe that drugs enhance their quality of life, even though they are experiencing negative consequences as a direct result of their addiction.

Why would social media affect depression?

While it’s true that increased social media usage is related to poorer moods, it may also be true that people who already have depression use social media more than people who aren’t depressed. Again, it’s difficult to parse the origins of comorbidity.

One of the key symptoms of depression is social isolation, withdrawal, and a loss of pleasure in activities which were once enjoyable. But, social interaction is a critical part of being human, and humans crave social contact and communication. People who are depressed and in the midst of withdrawing from social activities may be more inclined to connect with people through digital platforms.

But, loneliness is linked to a multitude of adverse mental health conditions. While people may be fooled into believing they are being social when they have lots of Facebook friends, people who use social media to substitute real connection report higher incidences of depression than people who have and nurture fulfilling real-life friendships.

Switching between multiple social media platforms is a form of multitasking. Multitasking is linked to poorer cognition and decreased mood. People who feel pressured to maintain various social media accounts and profiles also report increased feelings of anxiety, another trigger or symptom of depression.

Also, another common symptom of depression is feelings of shame or worthlessness. Social media is an incredibly powerful way for people to express unspoken social and cultural rules and expectations. People who feel they don’t or can’t live up to these expectations or who don’t ‘fit in’ with the broader culture may find themselves experiencing symptoms of depression after social media use.

When someone sees a peer on social media who seems to be doing better than them, financially or relationship-wise, they may start to feel worthless or shameful. Comparison robs people of happiness and life satisfaction, and jealousy is common among social media users.

Furthermore, online jealousy becomes a cycle that fuels itself. Surveyed respondents claim that seeing other people’s posts on social media can trigger envious feelings. In turn, these people will start to posts things with the intention of inducing jealous feelings in others. Social media then devolves into a constant process of one-upmanship among users. Interestingly enough, studies on ‘Facebook envy’ have concluded that envy is the mediator between social media and depression. That is, jealousy may be the cause of depression, not merely using social media.

In addition, social media use is linked to an increased chance of committing a social faux pas, which can lead to feelings of shame, embarrassment, and anxiety. Committing a faux pas online also makes a person susceptible to experiencing cyberbully or unwanted online contact.

Recent studies also indicate a causal role between social media and depression. The nature of social media experiences can cause depressive symptoms, and not only reflect them. In a study conducted on 264 young adults, researchers found that negative experiences on Facebook significantly increased a person’s risk of developing depression. Also, the scientists conducting the study had access to the survey participants health status dating back to 2002, providing reliable information that the participants did not have depression before experiencing adverse social media events.

In this survey, cyberbullying on Facebook accounted for a 3.5X greater risk in getting depression, while unwanted contact or cyberstalking accounted for 2.5X the risk. The number of adverse events contributed to a person’s risk, and even just one instance of cyberbully was found to trigger depression. In addition, the majority of these participants experienced a negative event on Facebook. 80% of the survey participants had at least one negative incident, while a further 60% claimed they suffered four or more negative events. Negative events like cyberbullying have also been linked to increased rates of teen suicide.

If adverse events are so strongly linked to depressive symptoms, social media use can certainly explain the increase in depression across all segments of society and especially amongst teens who have the highest rates of consumption. Women are also more likely to experience unwanted contact or stalking online, which may also explain increased rates of depression in this demographic.

Also, studies show the way in which people use social media may indicate whether or not they have depression or will develop it because of social media. Depressed people are less likely to have more than 300 Facebook friends, and are also less likely to post photos of themselves with others on social media. In addition, passively consuming information on Facebook, such as scrolling through a newsfeed for an extended period of time, is linked to higher rates of depressive symptoms. But, actively interacting with people positively is related to increased feelings of well-being.

What can someone do if they are experiencing depression related to social media use?

First, it’s important to understand if the depression came before or after social media use. In some cases, a person with depression may become addicted to social media as a way to self-medicate their symptoms. In turn, social media use can fuel depressive symptoms, making them worse.

Fortunately, there is help available for people who have depression that is linked to social media or internet use. Staying off social media if it makes you feel depressed or worsens depressive symptoms is an effective way to increase your mood and regain feelings of well being.

But for people who are experiencing depression related to internet addiction, rehabilitation can help. Signs of an internet or social media addiction include:

Cognitive behavioral therapy and talk therapy are incredibly effective at helping people control and negate addictive tendencies. Also, in a rehab center patients can get treatment for comorbid mental health conditions, such as depression and anxiety.

While depression and social media use are on the rise, with healthy habits, people can regain a sense of wellbeing despite the presence of social media. The medical and psychiatric communities now recognize the dangers of internet and social media addiction, and there are numerous therapeutic methods patients can utilize to cure their addiction and alleviate their depressive symptoms.