What is the Science Behind TMS Treatment?

TMS is a relatively new therapy for these mental health disorders and conditions, with the first type of TMS therapy only recently approved in 2008. 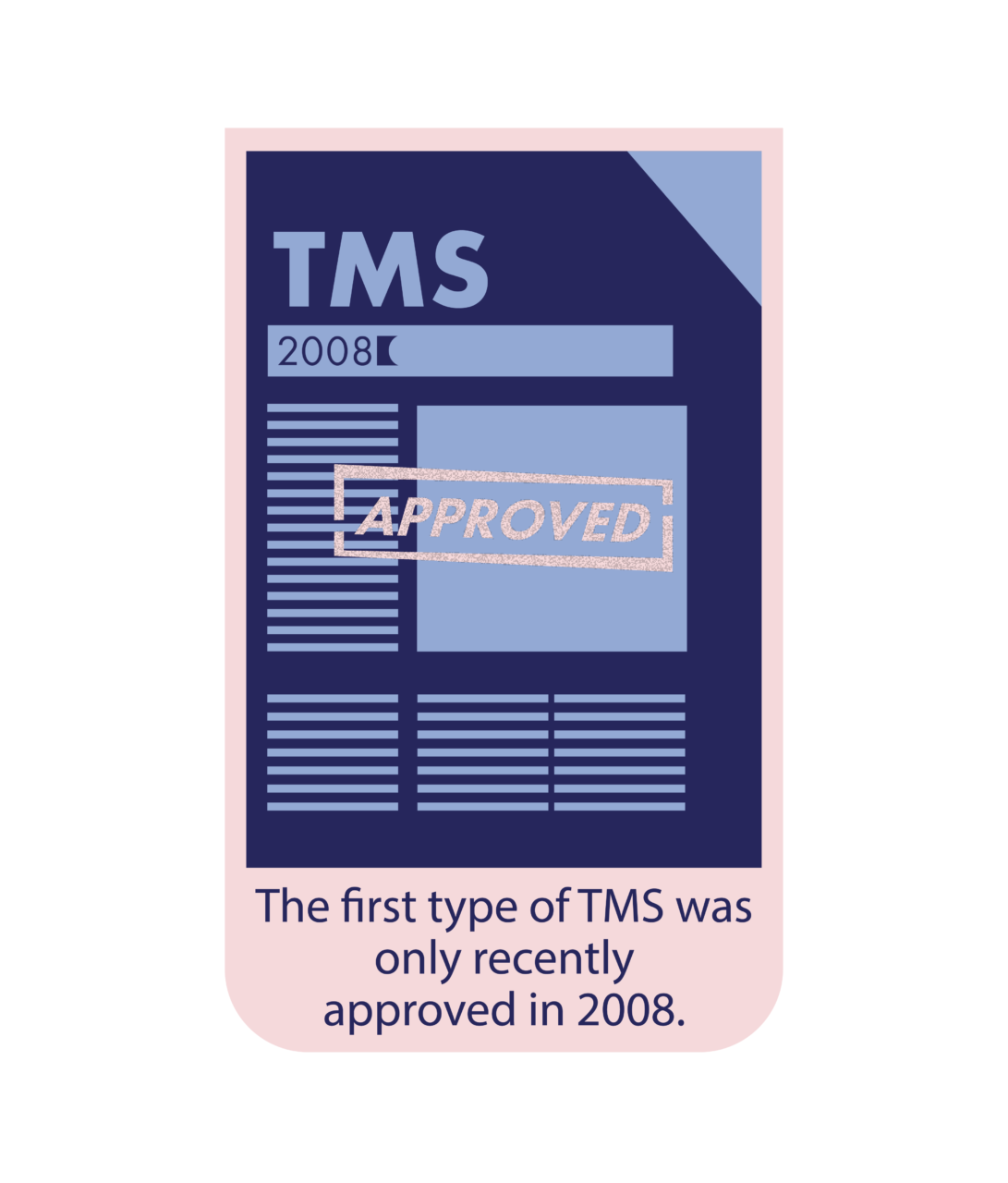 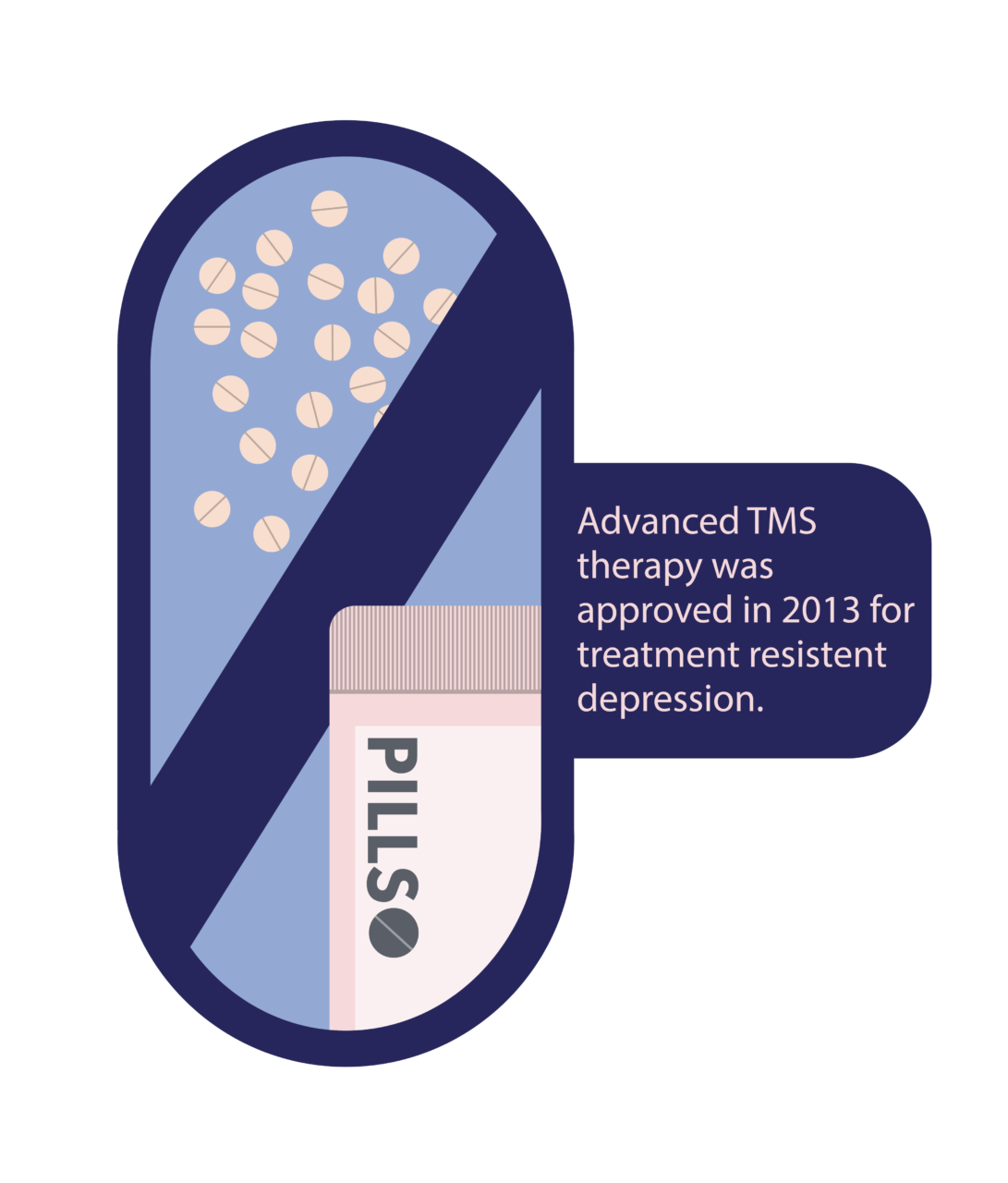 More advanced TMS therapy was approved in 2013 for treatment-resistant depression.

In August of 2018, the FDA approved TMS therapy for obsessive-compulsive disorder and migraine headaches. 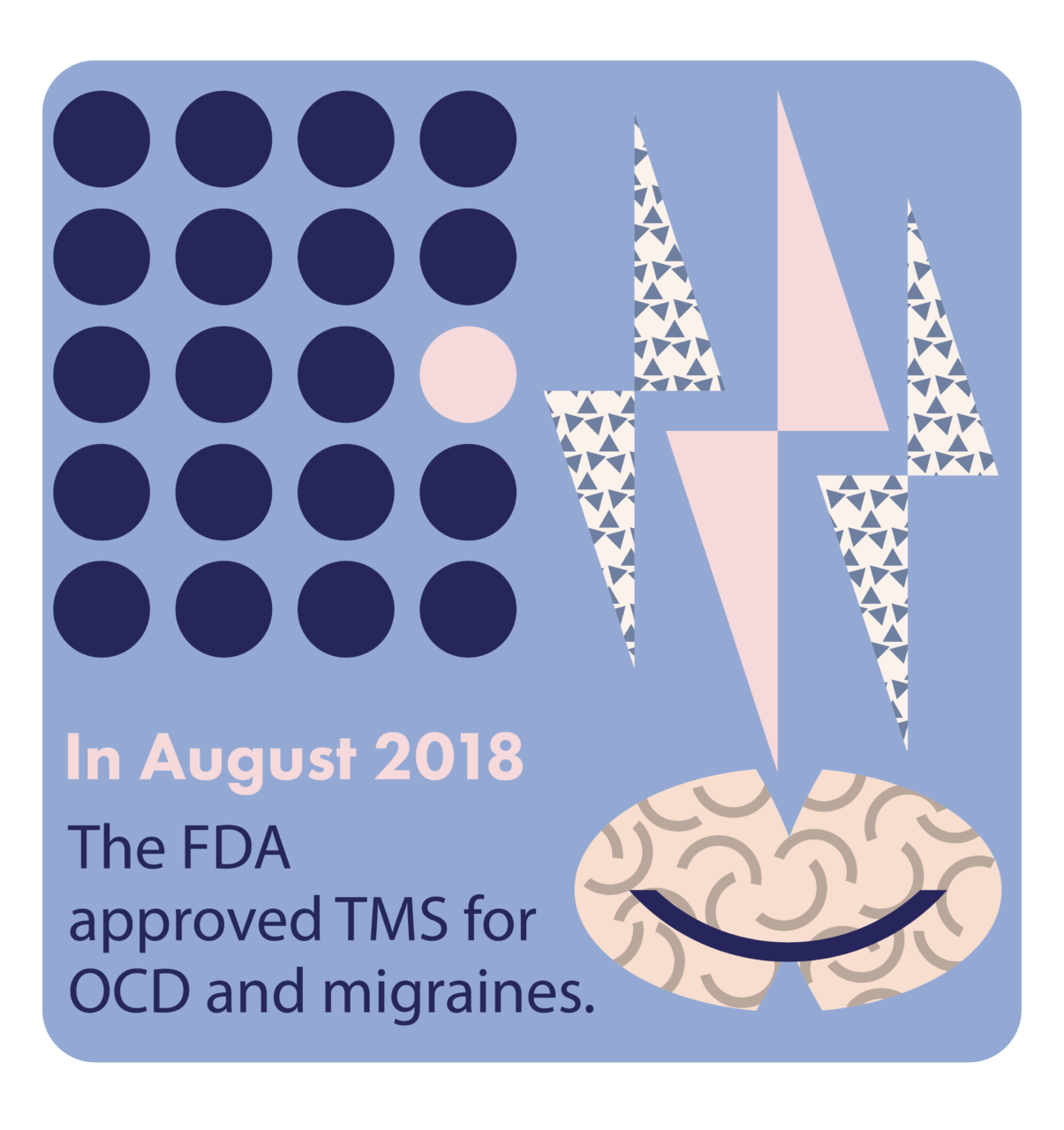 The idea of using magnets to stimulate brain activity isn’t new. In fact, the first experiments with magnetic coils and their impact on neurons happened more than 100 years ago. But, studies on the treatment’s effectiveness for depression and mental health disorder symptoms are modern-day developments. Thanks to the development of TMS and several improvements that have been made to the therapy, people with stubborn depression and OCD can finally get relief from their symptoms.

What is the science behind TMS?

TMS devices are powerful magnetic coils that are placed over the patient’s head. The coils that are used in the therapy will differ depending on the patient’s diagnosis. TMS coils are used to target specific regions of the brain that are known to play a role in depression, migraine, or OCD symptoms. TMS treatment uses a magnetic field that is of similar strength to the magnetic imagery used in MRI machines. The procedure is painless and noninvasive, and patients get to be fully awake for a TMS session.

The magnetic energy that is used in TMS therapy easily permeates the patient’s skull and the brain under the area where the magnet is placed. The neurons below the magnet can be depolarized or activated to produce neurotransmitters. Neurotransmitters are critical brain chemicals that influence a variety of mental and physical processes and symptoms. Typical medications for depression and other mental health disorders also impact the brain’s ability to produce these neurotransmitters. This is the primary mechanism that TMS uses to give patients relief from debilitating mental health disorders symptoms.

TMS is similar to other deep brain stimulation techniques like electroconvulsive therapy. But, TMS is far less invasive than ECT, and also comes with a lower risk of adverse side effects. Patients who undergo TMS treatment can return to work or school right after treatment, and they can also drive after a session. The most common side effects of TMS therapy are headaches, muscle tension, and facial muscle twitches. During TMS therapy, patients will hear a loud clicking noise and feel tapping where the magnet is placed while the device deploys magnetic energy to the patient’s brain.

Technicians usually place the magnetic coil over the front part of the brain in depressed patients. However, moving the coil to either the right side or the left side of the brain can have different, and sometimes opposite effects on symptom manifestations.

Each TMS session is customized to the patient’s needs. After several sessions of TMS therapy, technicians can change the magnet’s power or change the area it targets if there is a change in the patient’s symptoms. Most patients will experience a reduction in depression symptoms after receiving between 20 and 30 TMS sessions. 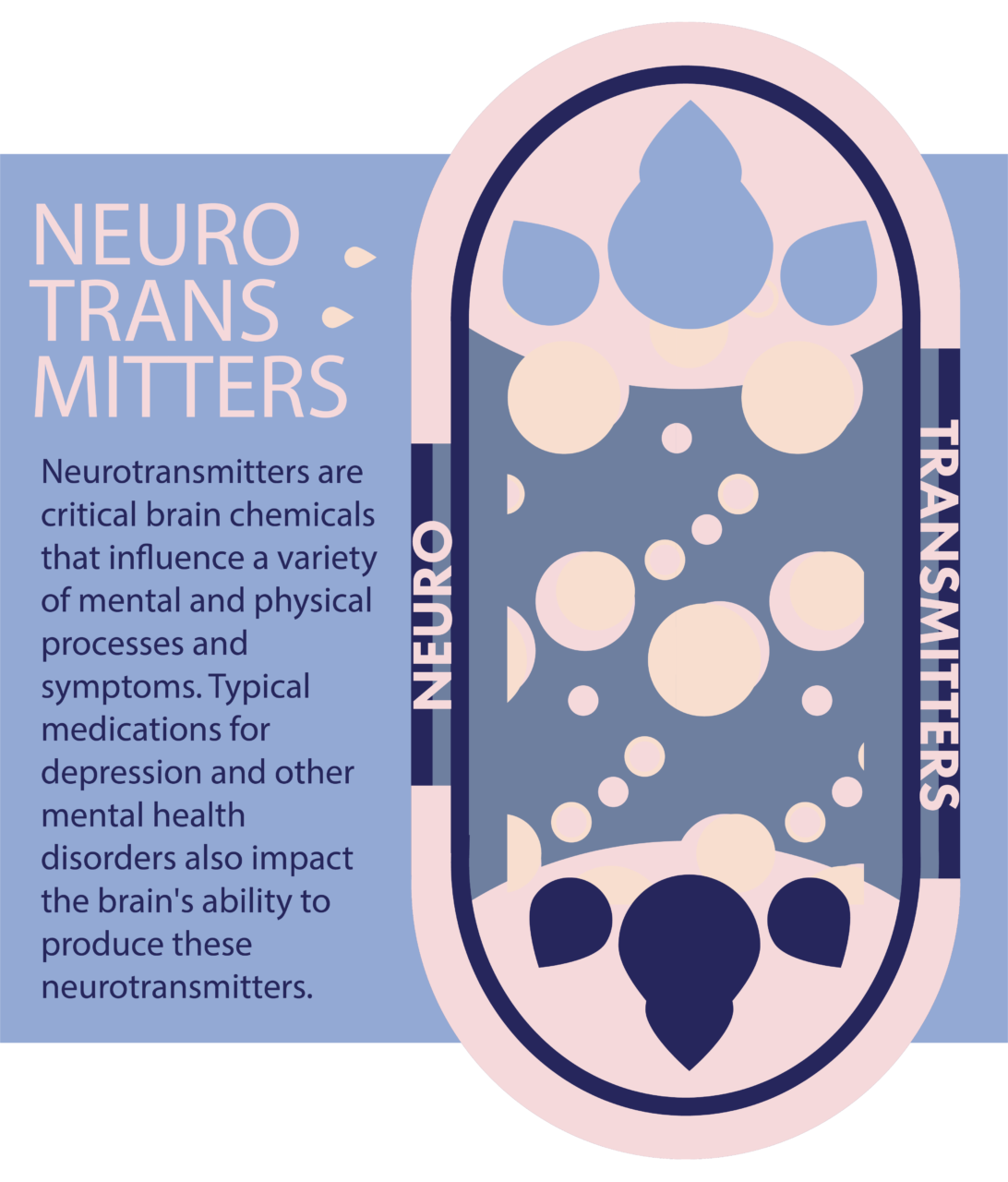 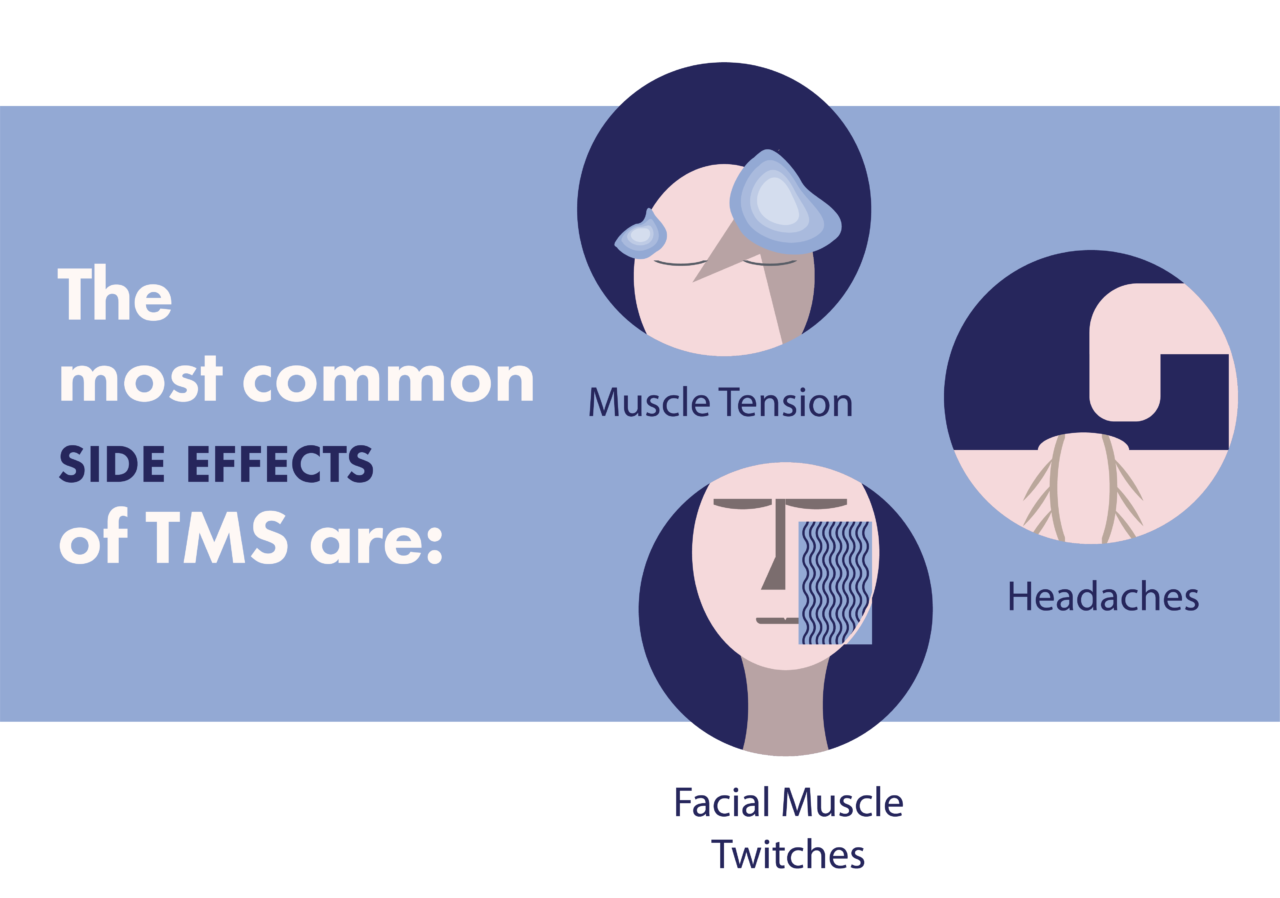 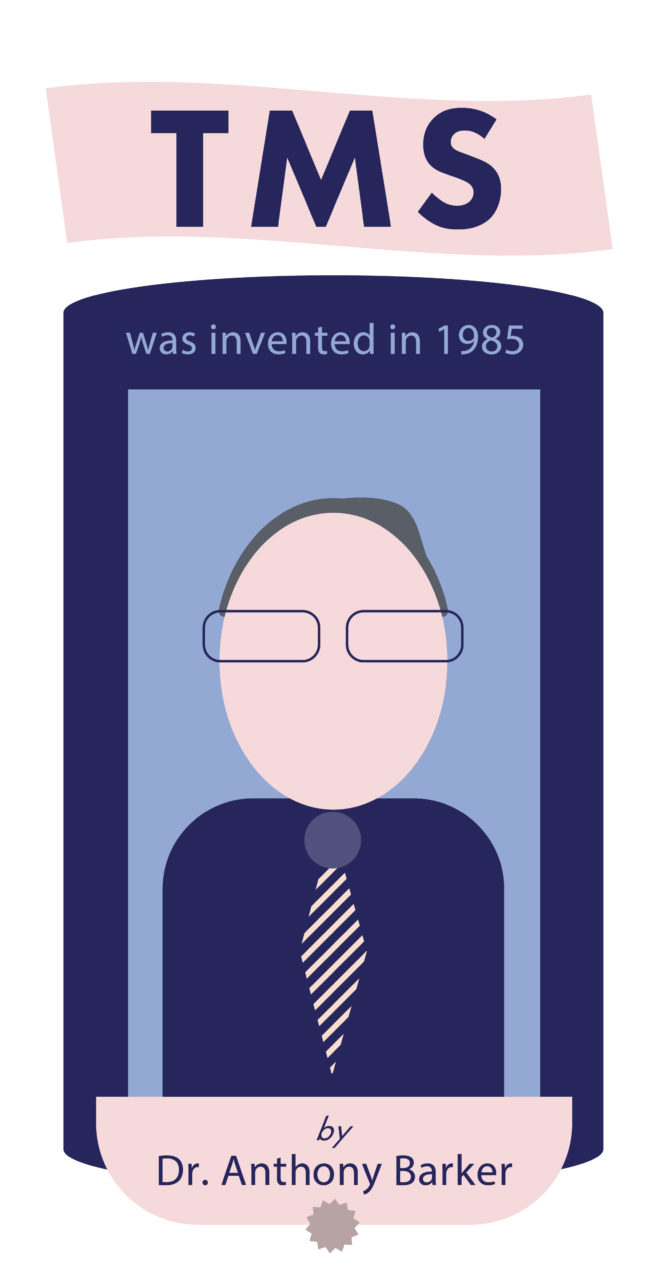 How many scientific experiments have been conducted on TMS and what scientists have been involved?

TMS was invented in 1985 by Dr. Anthony Barker and a team of other medical scientists and doctors. 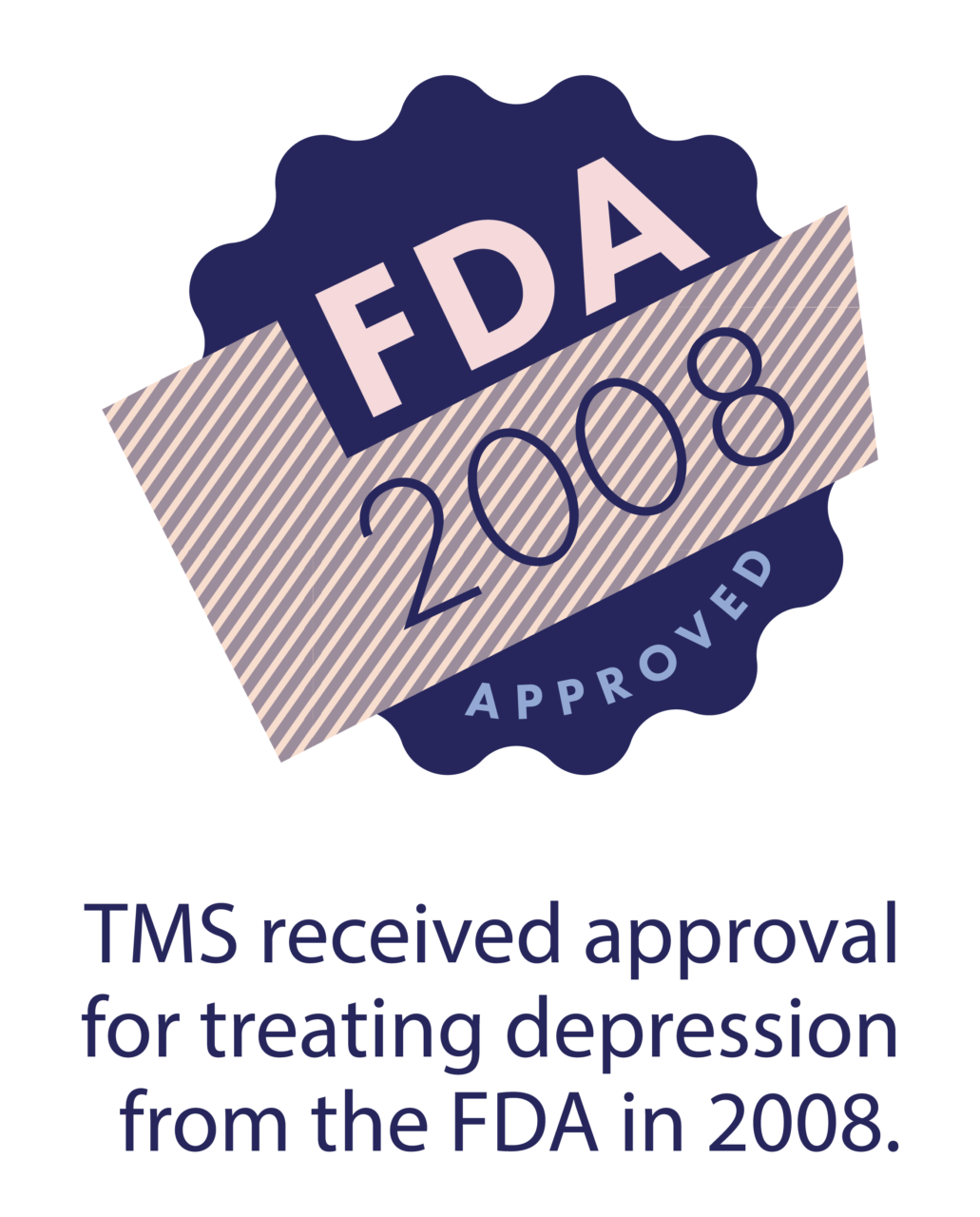 TMS did not receive initial FDA approval for treating depression until 2008. Between 1985 and 2008, hundreds of studies were conducted on TMS and it’s effectiveness and safety.

Ten years later, almost one hundred more clinical trials and meta-analyses were completed. These studies found that rTMS was moderately effective for alleviating major depression symptoms. The results of the studies prompted the FDA to approve rTMS for treatment-resistant depression. The studies indicated that rTMS could induce remission of depression symptoms in up to 14% of patients.

This result was comparable to remission rates seen with depression medications. But what made rTMS an attractive treatment option for depression was that the therapy caused fewer side effects than conventional antidepressant medications. Also, many patients won’t respond to medications for depression, but they will react to rTMS favorably.

While the findings were a victory for TMS researchers, doctors, and their patients, a 14% remission rate did not set TMS apart from traditional forms of depression treatment substantially. At this point in the science behind TMS treatment, scientists began to experiment with a newer form of TMS treatment, called deep repetitive TMS.

This type of TMS therapy was able to penetrate more deeply into the brain tissue with a new coil, called an H-coil. A substantial TMS trial, funded by NIMH, was conducted and the results published. Researchers discovered that deep rTMS, also called dTMS, was even more effective at treating stubborn depression than older rTMS and the original magnetic coils used in those older devices. 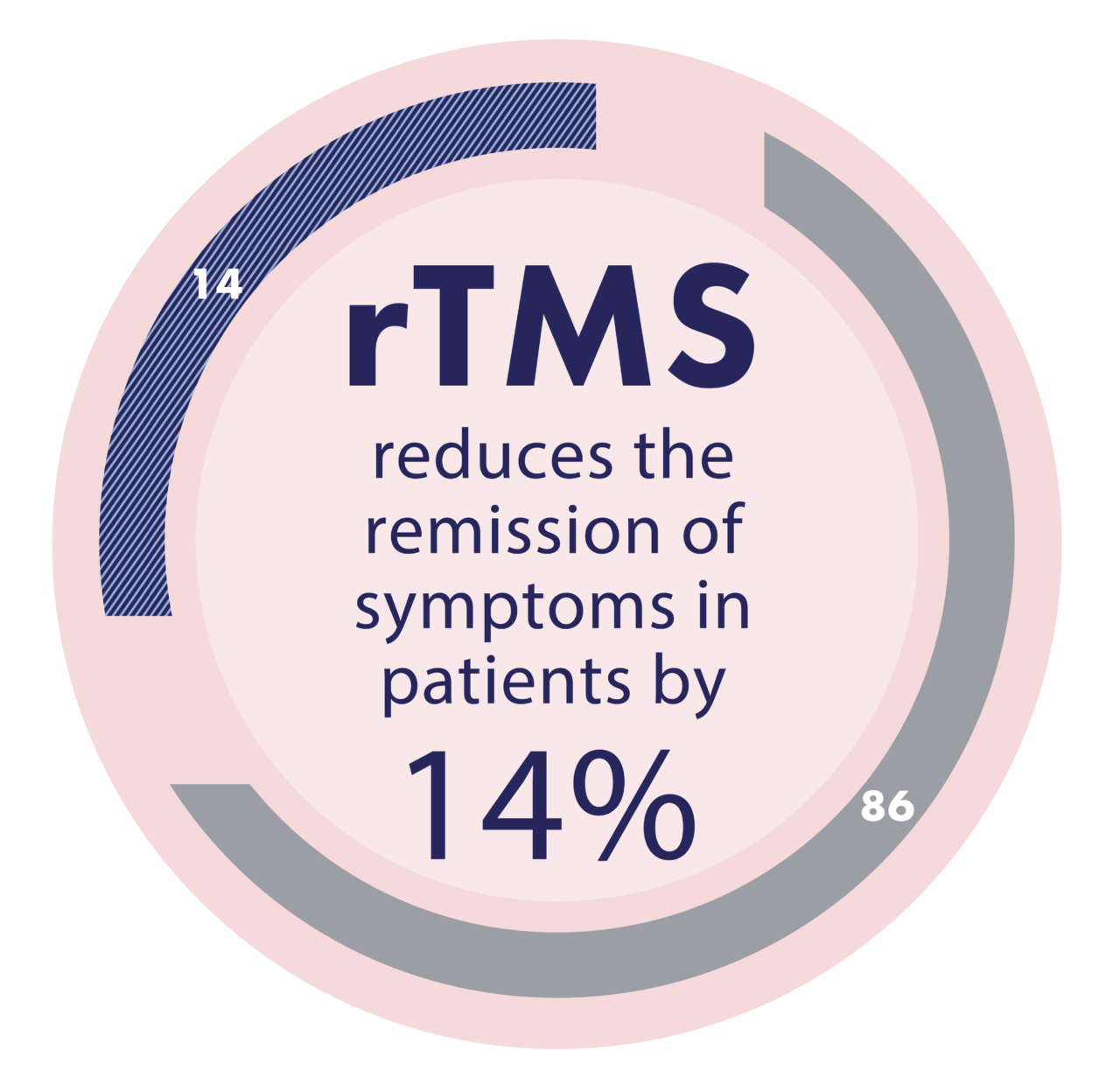 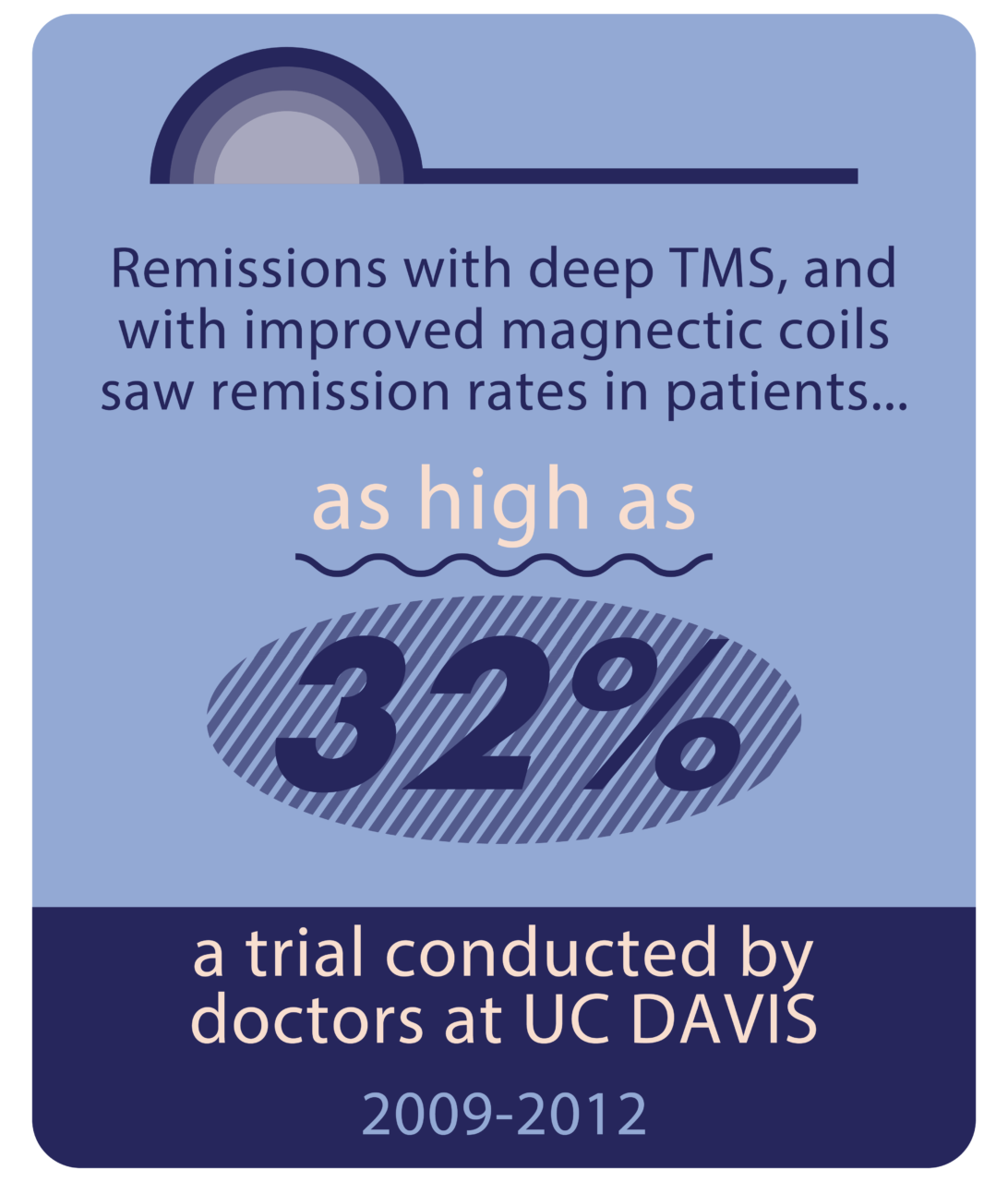 The NIMH trial was launched in 2009 by a team of doctors led by Dr. Xia at UC Davis. It concluded in 2012. {8}Instead of a remission rate of 14%, remission rates with dTMS were as high as 32.6%. The study’s participants were patients with extremely treatment-resistant depression, who had tried at least two or more medications and did not experience improvements. The study’s results were incredibly promising and prompted the FDA to approve the treatment method quickly. Today, patients who can’t tolerate depression medications, or who are unable to find symptom relief after trying just one antidepressant, can use dTMS.

In 2013, the FDA also approved TMS for migraine prevention in patients suffering from chronic migraine. In 2018, the FDA approved a new TMS device for acute migraine sufferers. This TMS device uses a single-pulse magnetic coil, and the treatment is called sTMS therapy. The device is user-administered, so migraine sufferers can use the treatment at home before migraine pain becomes debilitating. The treatment is incredibly convenient, and also gives patients the ability to fight migraines without having to use harsh medications that can come with a range of possibly distressing side effects.

How is the science behind TMS improving?

The most significant downside to TMS therapy is that it is a new treatment method, and the magnet is not always precise when it comes to targeting areas of the brain. However, further studies have found that using highly targeted magnetic pulses can cause biochemical and also connectivity changes throughout the brain.

In 2015, researchers at the University of Nottingham used highly targeted bursts of MRI-guided magnetic pulses on 27 healthy volunteers. The vibrations were targeted to the participants’ dorsolateral prefrontal cortex. This study was the first of its kind to use MRI-guided, focused TMS pulses to induce changes in brain networks and neurochemicals. The researchers measured small changes in brain functioning and also changes in brain chemistry through magnetic resonance spectroscopy.

After a single session of the targeted TMS pulses, the magnetic energy changed the connections between large-scale brain networks. The right anterior insula was mostly affected, and this area of the brain is known to play a significant role in the manifestation of depression symptoms. Also, the targeted TMS pulses changed the amount of GABA neurotransmitters in the participants’ brains. GABA is another critical neurotransmitter in the development of depression symptoms.

The researchers’ ability to target and accurately measure the impact of TMS treatment on the brain means that scientists and doctors now have a better understanding of the therapy’s direct effects. Being able to see the immediate results, and target the pulses accurately can help doctors tailor treatment to each patient. These developments will hopefully give doctors and patients the ability to create and utilize highly personalized treatment plans for depression. 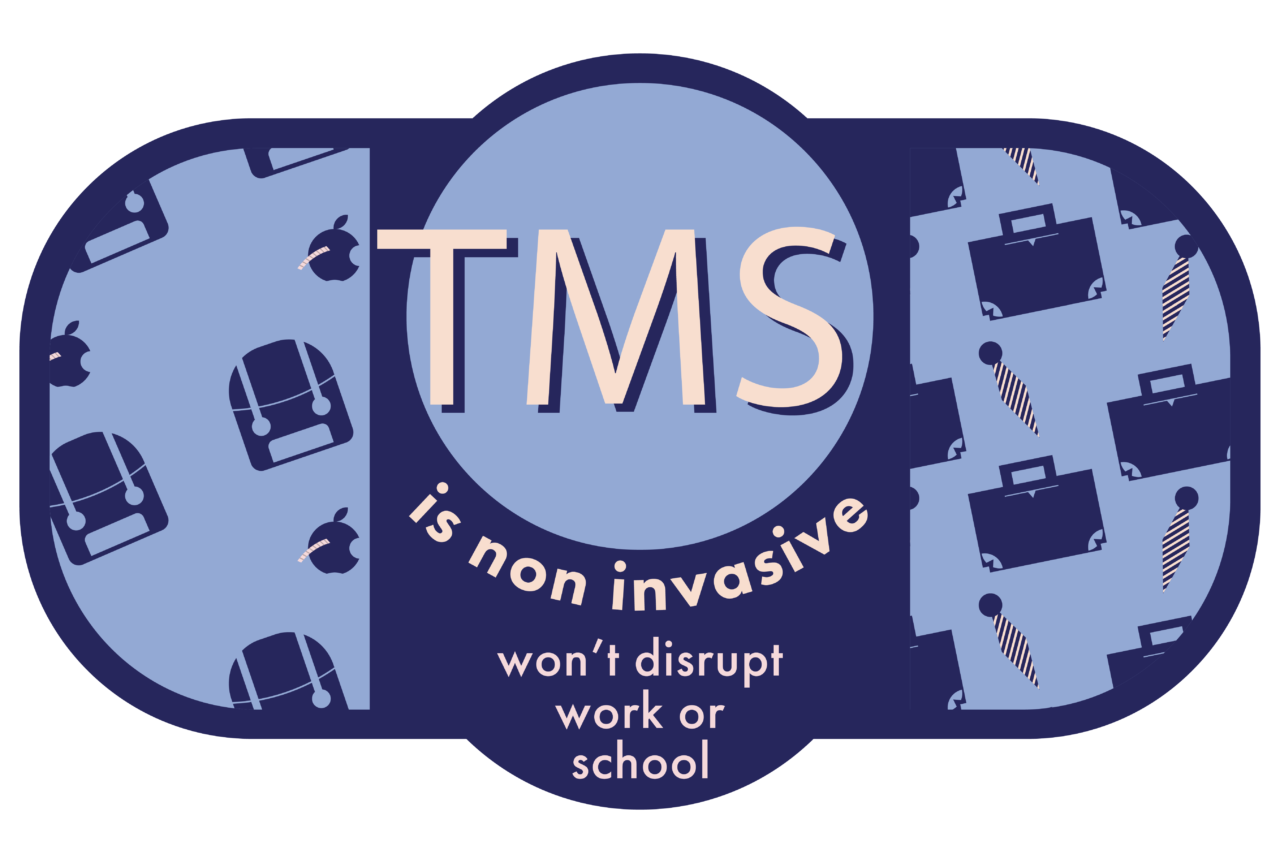 Another recent development in TMS therapy is that the FDA approved TMS for OCD in August of 2018. Studies on OCD and TMS therapy found that up to 38% of OCD patients who used TMS saw a significant reduction in their symptoms.

TMS is a highly effective treatment method for a variety of mental health disorder symptoms and debilitating headaches. Patients can find relief from their symptoms without risking adverse and possibly severe side effects that are common with many antidepressant medications and other deep brain stimulation techniques. Furthermore, TMS is noninvasive and won’t disrupt a patient’s ability to go to work or school. 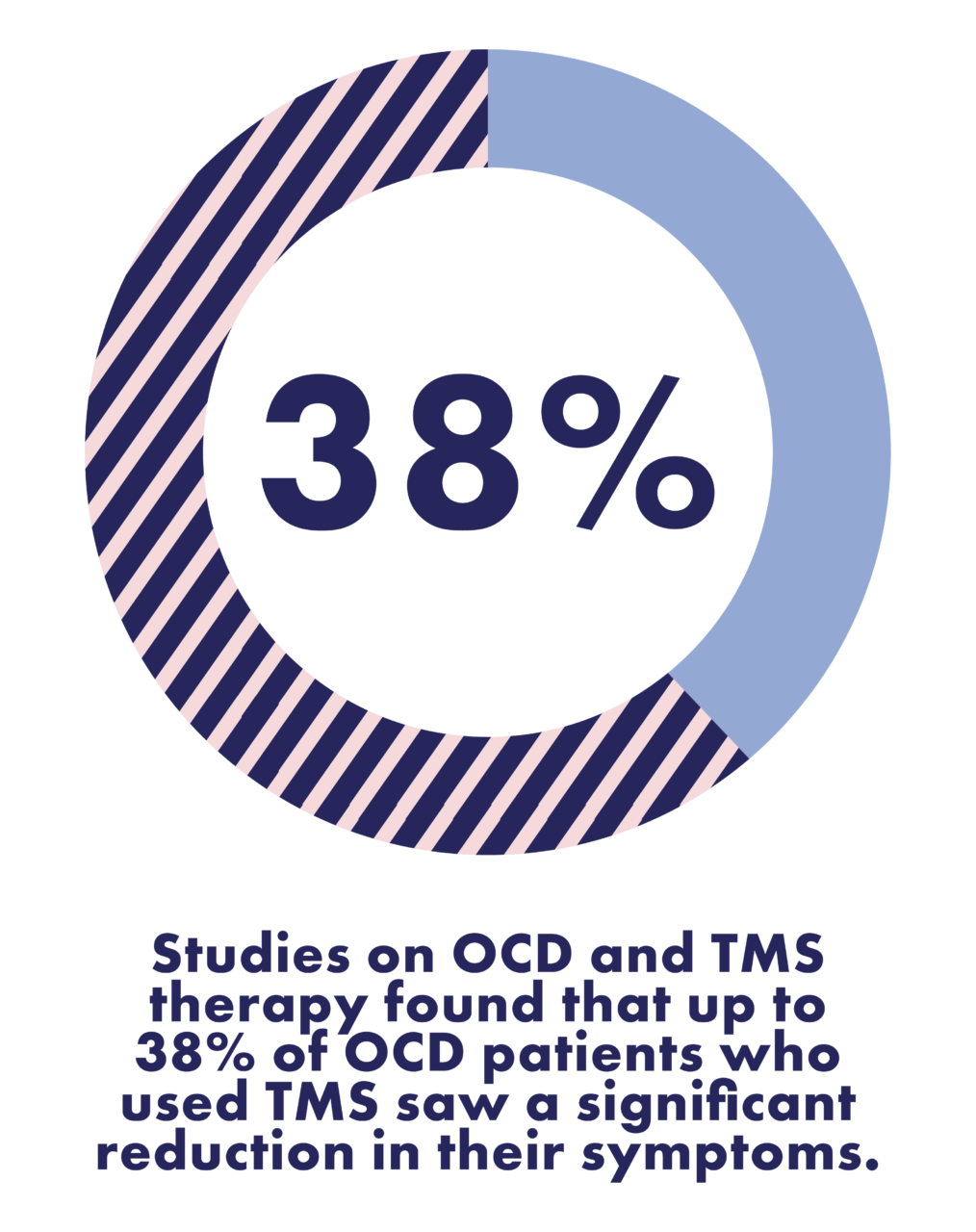 Be aware, be safe, and be well.

The Long History Behind TMS

Although transcranial magnetic stimulation (TMS) uses relatively new technology, the idea in its more primitive form has been around for a long time. Today, it’s a noninvasive procedure used to treat pain and disorders like depression or obsessive compulsive disorder (OCD). It is especially helpful for people who don’t want to take medication or have not responded to traditional therapies.

How Did TMS Treatment Start?

The earliest record of electrical stimulation for pain goes back thousands of years. Around 15 AD, a Roman physician accidentally discovered that a torpedo (electric) fish relieved gout pain. Other stories say Egyptian pharaohs relieved pain by standing in water with electric eels. In 1919, Charles Willie Kent patented and manufactured the first electrical nerve stimulation device in Peoria, Illinois, but the U.S. government prosecuted him for making unproven medical claims.

Before you question the benefits of electrical stimulation, consider Ignaz Semmelweis, the Hungarian doctor who theorized that clean hands could prevent infection. As a result, he lost his job in the obstetrics department of a hospital and become the laughingstock of his peers. After his death, the practice became widely accepted.

The History of TMS and Depression

Michael Faraday (1791-1867), a British chemist and physicist, introduced the idea of using magnetic fields to produce electrical currents. By the 1870s, scientists found that low-intensity stimulation of the brain had an effect on motor skills. Research proved the technique to be safe over the following decades, and Anthony Barker introduced a TMS device that stimulated the cerebral cortex in 1985.

TMS for Depression and Other Disorders

The nervous system uses molecules called neurotransmitters to carry messages between cells or from cells to muscles. Because clinically depressed individuals have brains that make and process neurotransmitters differently from those who aren’t depressed, treatments like TMS and antidepressants help by increasing serotonin and dopamine production. TMS also helps to treat co-occurring conditions. Depression often occurs with anxiety or other disorders, making each more severe and difficult to treat. While talk therapy and medication relieve symptoms and improve well-being, not everyone responds to or wants counseling or medication.

Transcranial magnetic stimulation, a technique that increases serotonin levels in the brain, can be used with traditional therapies or as an alternative depression treatment. The FDA has approved TMS for treating depression, migraines, and OCD; and studies suggest it is also effective for other physical and mental disorders. Because illnesses like depression and OCD lead to other emotional and physical conditions, they cost the U.S. billions every year in medical care, legal costs, and lost productivity.

At Pulse TMS, our trained professionals use Brainsway technology to offer the latest in OCD and depression treatment. Brainsway therapy offers these benefits:

Pulse TMS will work with your health care providers to help you reduce symptoms of depression or OCD or refer you to therapists who offer care that supplements your TMS treatment.