The Future of TMS

The Future of TMS

What is the Future of TMS?

Depression is the leading cause of disability in the U.S. While there are many different, effective medications and therapy methods for treating depression, these conventional, first-line approaches won’t work for everyone. A significant minority of depression sufferers will not respond to treatment. Trying one antidepressant that doesn’t work is unfortunately correlated with further adverse outcomes for patients who try any subsequent prescriptions.

Thankfully, cutting-edge deep brain stimulation techniques have proven effective for treating the symptoms of major depressive disorder, and other severe mental health conditions like anxiety and OCD.  Electroconvulsive therapy (ECT), vagus nerve stimulation, and transcranial magnetic stimulation (TMS) can directly target the areas of the brain that are responsible for a variety of distressing mental health symptoms. 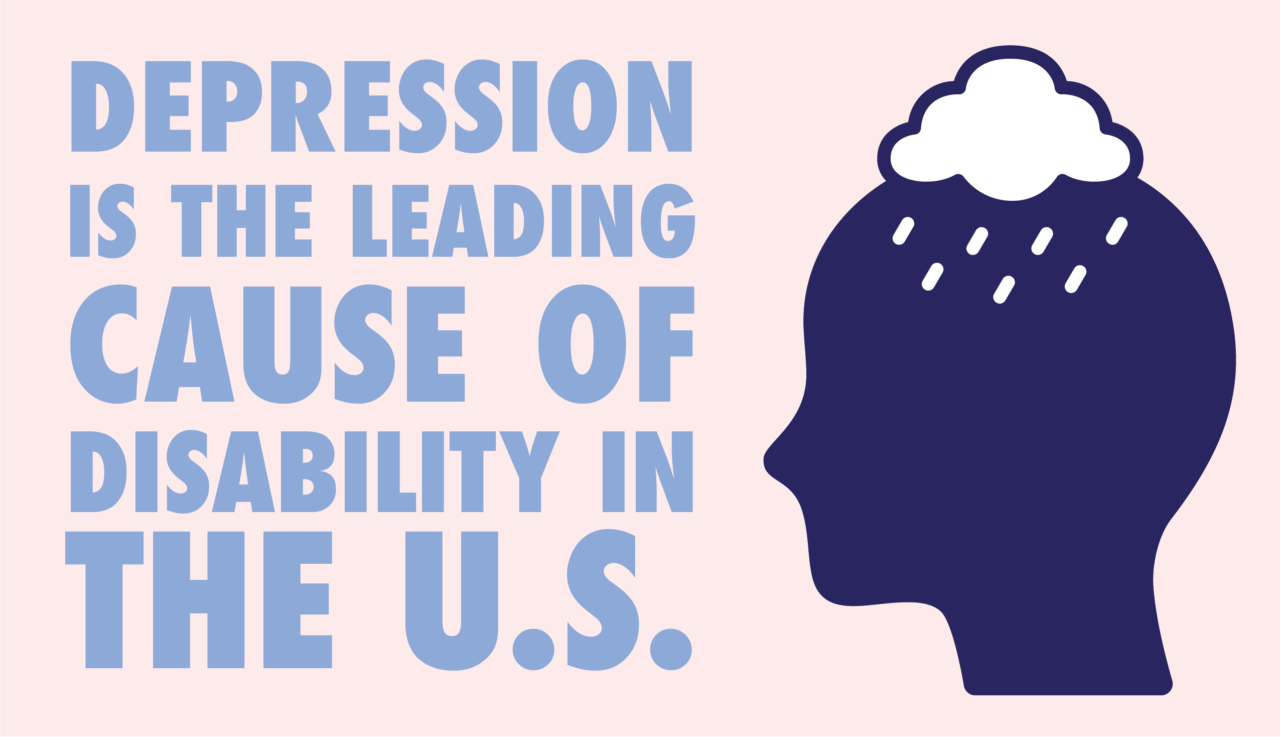 TMS uses magnets to influence critical brain chemistry that is thought to play a role in mental health disorder symptoms. With TMS, a strong, magnetic coil is placed over certain regions of the patient’s head. These regions are stimulated with a strong magnetic pulse that can influence the brain to produce or decrease certain neurotransmitters.

TMS uses magnets to influence critical brain chemistry that is thought to play a role in mental health disorder symptoms. With TMS, a strong, magnetic coil is placed over certain regions of the patient’s head. These regions are stimulated with a strong magnetic pulse that can influence the brain to produce or decrease certain neurotransmitters. 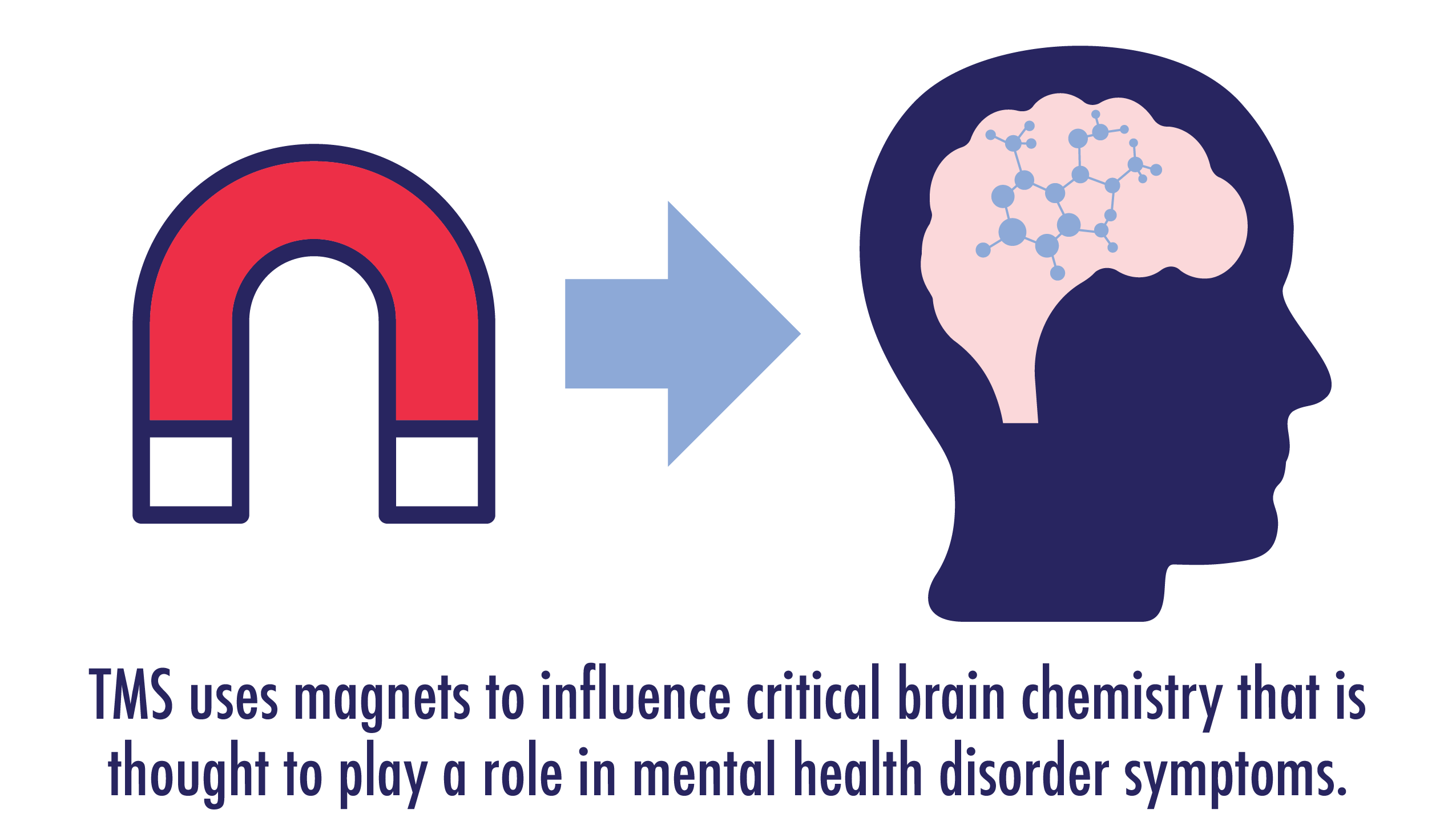 TMS is effective and also an attractive treatment option for doctors and patients alike for several reasons.

For the patients, TMS is noninvasive and comes with a low risk of side effects. The side effects that do occur in TMS are usually short-lived, minimal, and will often go away after several TMS sessions. Patients can return to work or school shortly after a TMS session. They do not need to be hospitalized or sedated.

Doctors like TMS not only because it is an effective treatment method, but also because it offers a targeted approach to treating mental health symptoms. The first-line pharmacological treatments for depression impact the entire brain. They also take several weeks to begin working. In some cases, TMS can produce a therapeutic effect within as little as five days of daily treatments. Other deep brain stimulation techniques, like ECT, impact the entire brain and also leave the patients with a range of unpleasant side effects, some of which can be long-term. Vagus nerve stimulation also comes with a risk of infection. Because TMS is noninvasive and does not require sedation, it is also less expensive than other effective deep brain stimulation techniques.

What is the history of TMS?

TMS has been used for mental health disorders since 1985 when scientist Anthony Barker created the first TMS device. However, the road toward using noninvasive, deep brain stimulation to treat an array of neurological disorders has roots going back to the late 1700s. In 1790, scientists discovered that the human body used electrical signals to function and communicate. In 1875, experiments with low-intensity electrical stimulation of the brain uncovered that the brain’s central cortex possessed the map of the human body’s motor function. It wasn’t until 1959 that scientists began using magnetic fields specifically to stimulate nerve signals and muscle contractions. 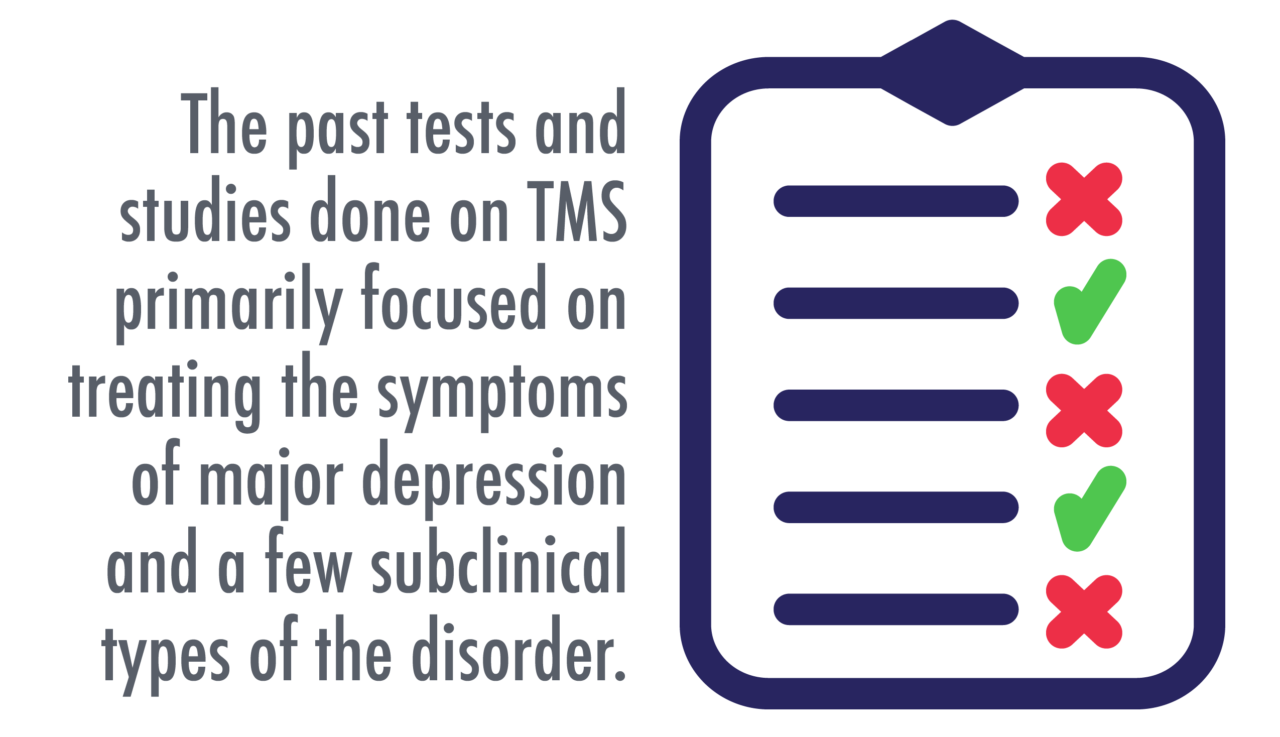 In 1987, Anthony Barker and his team released the first set of safety guidelines for TMS therapy. Throughout the 1990s, numerous studies were conducted on TMS and indicated that the method was safe and also effective for alleviating the symptoms of major depressive disorder. Canada was the first country to approve TMS for depression treatment in 2003. A few years later, the FDA and the U.S. followed suit in 2008. Clinical trials in the U.S. found that TMS could treat major depression in 2010, and in 2013, several insurance companies started to offer TMS treatment coverage for depression. 2017 marked the first year in TMS history that the treatment became widely used as an alternative therapy for depression when drugs failed.

What is TMS typically used to treat?

TMS has been proven safe and effective for treating major depressive disorder, and several subtypes of depression, including postpartum depression. TMS can also treat chronic depressive disorders and treatment-resistant depression. Patients with obsessive-compulsive disorder and anxiety can also benefit from TMS treatment. Currently, several studies are being conducted on other severe mental health disorders and how transcranial magnetic stimulation can treat them. 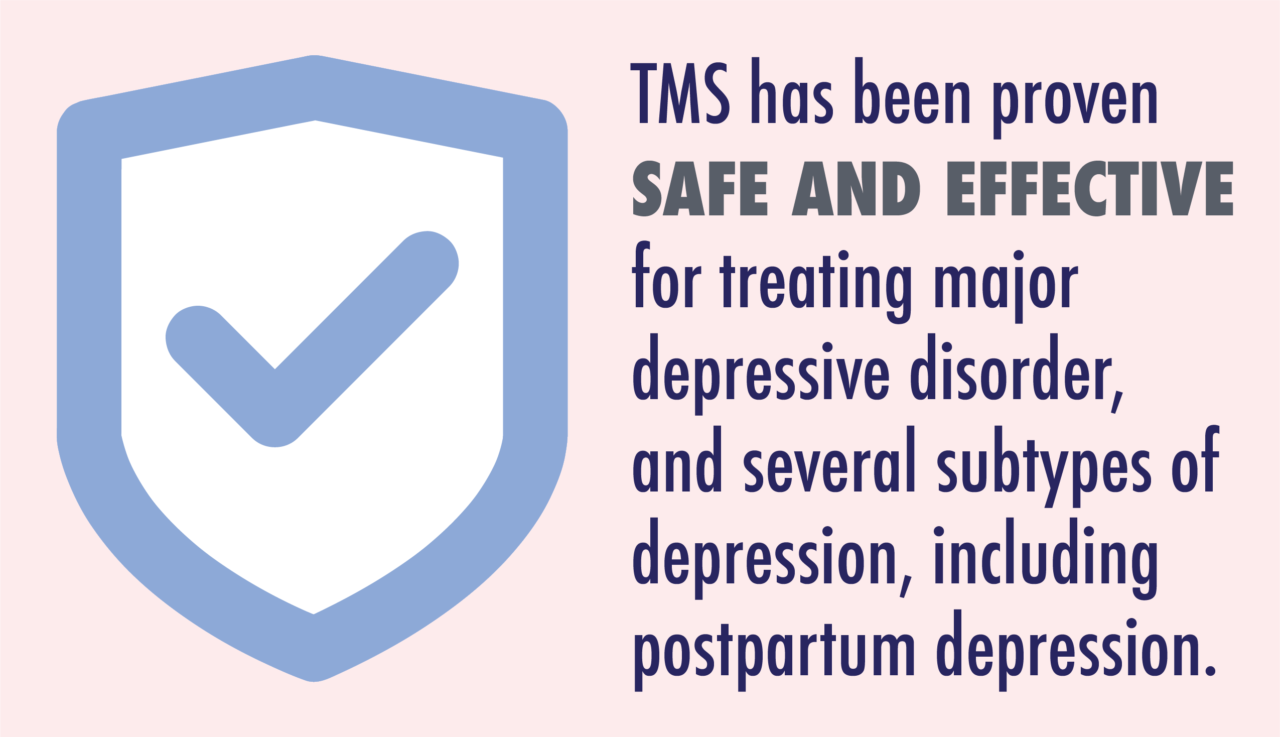 What other ailments is TMS being tested on?

The past tests and studies done on TMS primarily focused on treating the symptoms of major depression and a few subclinical types of the disorder. Currently, TMS is being tested on treating

Schizophrenia is a mental health disorder that encompasses a broad range of different symptoms. Positive symptoms refer to patients hearing, seeing, or perceiving things that aren’t real. Hallucinations, delusions, and involuntary, repetitive movements are all positive symptoms of schizophrenia. Negative symptoms refer to the absence of things. In schizophrenia, a lack of emotion, apathy, withdrawal, and trouble talking are negative symptoms that TMS may be able to help alleviate, but research into this arena of TMS treatment is ongoing, and the results are not conclusive yet. Many of the common prescription drugs that are used to treat schizophrenia come with a range of unpleasant side effects and TMS may reduce this discomfort and risk to patients with the disorder as more and more studies come out in favor of TMS treatment for schizophrenia.

Little research has been done on using TMS for bipolar depression. In fact, TMS is not recommended for patients who experience mania because it is believed that TMS can trigger a manic episode in at-risk patients. Unfortunately, bipolar disorder is a very disruptive and distressing condition, and it’s also difficult, but not impossible, to treat. Many conventional antidepressant medications are often ineffective for bipolar depression. Moreover, these same medications can trigger mania or hypomanic episodes in bipolar patients.

In a study on bipolar patients with depression, TMS, in combination with certain medications and some forms of talk therapy, was able to improve symptoms in some patients. However, other patients had manic and hypomanic episodes triggered by the TMS technique. The study concluded that the emergence of manic and hypomanic symptoms from TMS treatment could be an indicator of poor outcomes with this treatment method. But, the fact that TMS was able to help some of the study’s patients also pointed to the need to study the effects of TMS on these patients further in controlled trials. Future trials will most likely aim to establish the correct TMS parameters for treating patients with bipolar depression.

During TMS treatment, the magnet is placed above targeted regions of the brain, and it produces a magnetic field. The magnetic field changes to an electric field within the brain, stimulating the neurons. The electricity that’s firing in the neurons during TMS therapy can jump over the neurons’ myelin sheathing. The electrical current then alters the functioning of those neurons and enables doctors to treat certain neurodegenerative diseases, such as M.S., and depression, by essentially recharging the brain’s crucial neurons that play a role in the manifestation of symptoms.

For doctors to effectively treat patients, a patient’s neurodegenerative disease must be accurately diagnosed. Many of the symptoms of some of the most common neurodegenerative disorders often overlap, especially in the early, crucial phases of the illness. In many cases, these diseases can only be confirmed beyond doubt with an autopsy. Repetitive TMS treatment has been proven effective for isolating Parkinson’s disease from other neurodegenerative illnesses, which can help doctors make a correct and accurate diagnosis. TMS can also help doctors distinguish between frontotemporal dementia and Alzheimer’s disease, which are frequently mistaken for each other.

Once an accurate diagnosis is established, doctors can then work out the effective parameters for using TMS to treat the specific disorder. TMS can help address some of the symptoms of Alzheimer’s disease in the short term, but TMS treatments are most effective when they are combined with cognitive training. TMS can also alleviate some of the symptoms of Parkinson’s disease.

Many neurodegenerative diseases produce inflammatory effects. Studies are being conducted on the impact of low-frequency magnetic stimulation on neuro-immune system cells that play a role in the manifestation of inflammatory symptoms. Research has also indicated that TMS may have some effect on cell oxidation. However, the results are inconclusive at this time, and it’s still not completely understood how TMS impacts the human body on such a minute molecular level.

TMS may also help reduce fatigue in M.S. patients. A study out of Zurich, Switzerland, found that using TMS to stimulate the prefrontal cortex and motor cortex could minimize fatigue, but that targeted stimulation of the motor cortex was most effective for alleviating this symptom in both depressed patients and M.S. patients. In MS patients, numerous areas of the brain must be used to complete what would otherwise be simple motor tasks and functioning. This mechanism of the disease is known to have an impact on why M.S. patients suffer from fatigue. The researchers believe that TMS can help M.S. patients specifically by stimulating areas of the brain involved in motor tasks that could reduce the brain from being taxed in other vital areas, which would spare the patient’s energy.

How is TMS technology evolving, and how is it being tested?

Breakthroughs in how neurotransmitters are understood and how magnetic stimulation can treat certain symptoms and disorders have caused a marked evolution in the technology used for TMS treatment. Coil sizes and the shape of TMS coils have changed in order to better target certain regions of the brain known to play a role in symptoms. Studies on the different, new, and emerging models of TMS coils are ongoing, and researchers have also experimented with the distance of the coils from the patient’s head and how that can impact the treatment.

In 2018, the FDA approved a new TMS device, called sTMS, that delivers a single pulse to the brains of those suffering from debilitating, frequent migraine headaches. Researchers found that using sTMS helped reduce the number of days people had headaches by one-third. The device is also effective for improving some secondary symptoms of migraines. 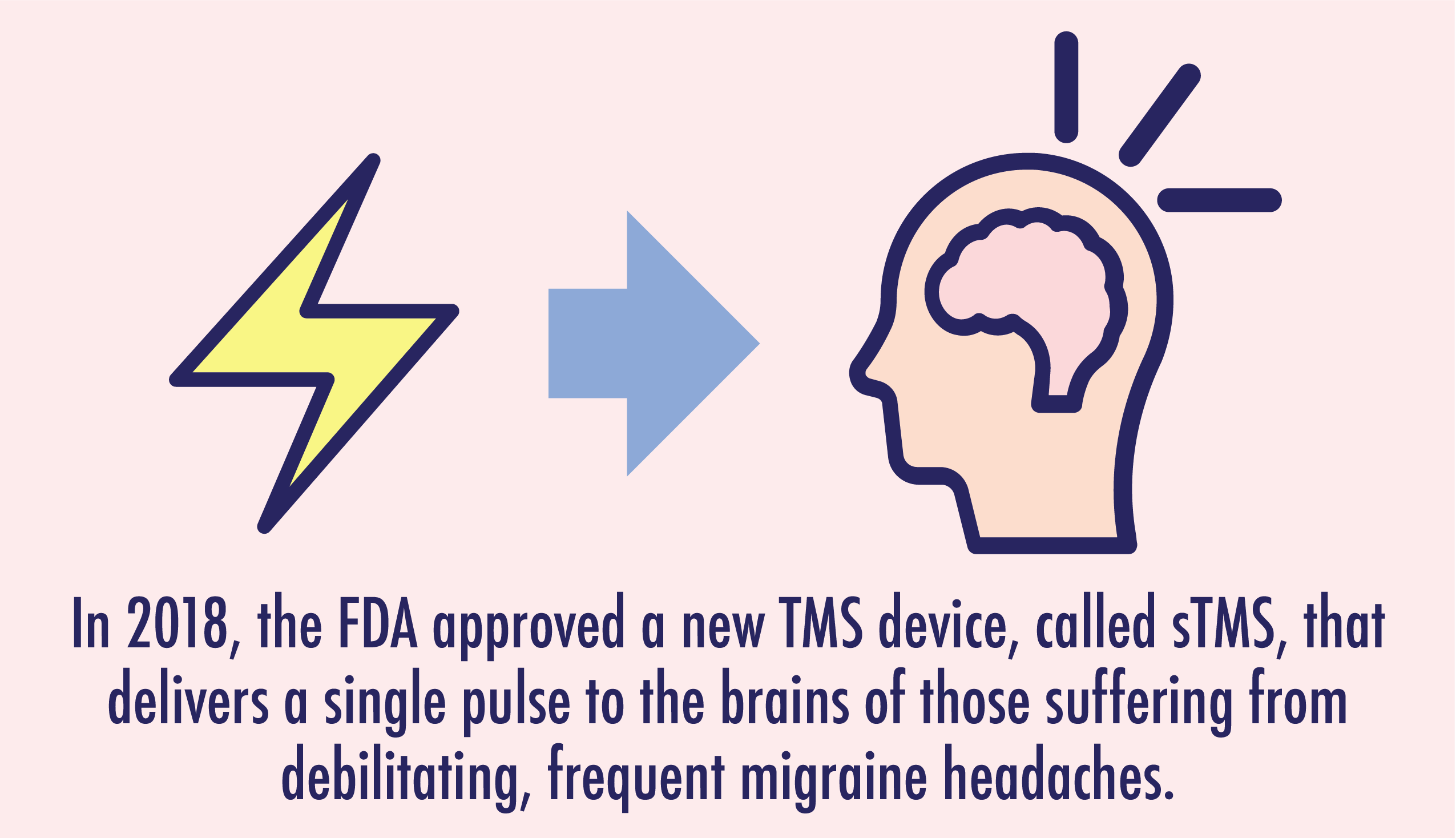 Who is leading the initiatives in TMS research and evolution? 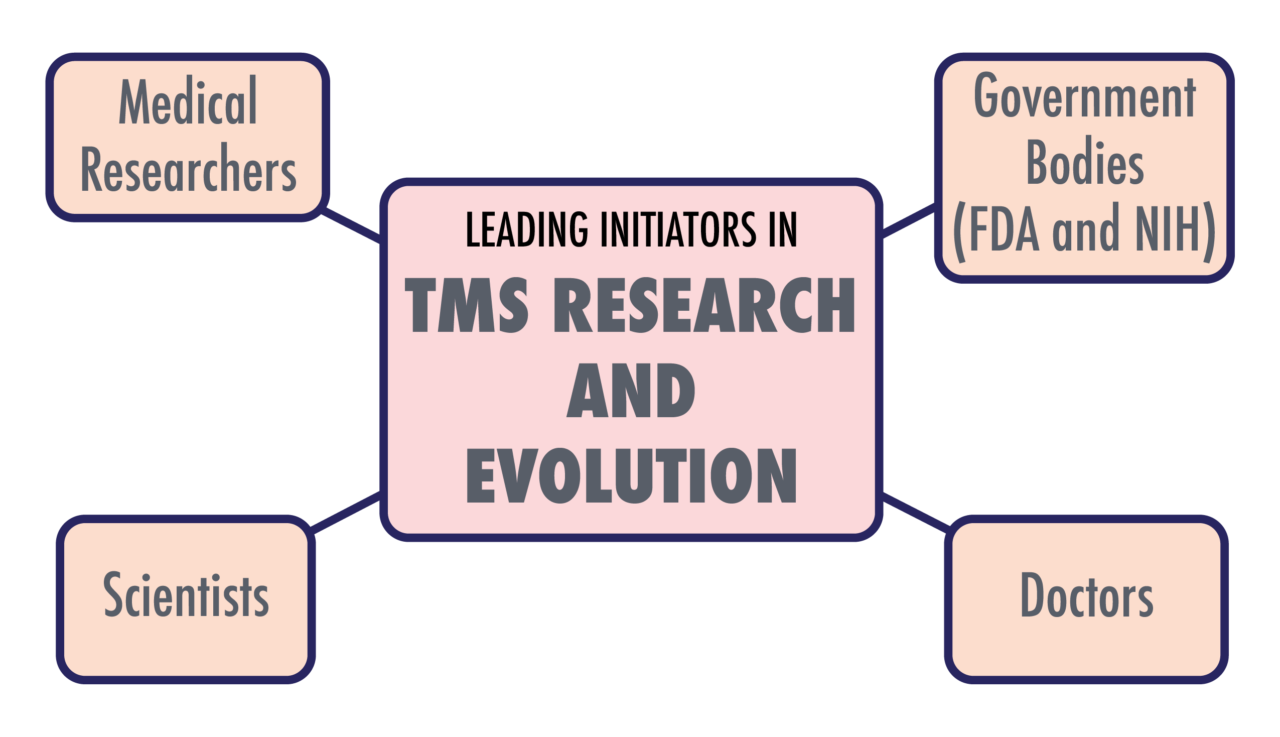 Medical researchers, scientists, doctors, and certain government bodies, such as the FDA and NIH, are leading many of the initiatives in TMS research and evolution.

What countries are leading the way for the future of TMS?

Most of the new research on TMS treatment is being spearheaded by researchers and scientists in the U.S., E.U., and Canada. Canada was one of the first countries to adopt TMS treatment for major depressive disorder.

What is being done on the government and legal levels in terms of TMS?

When could the next breakthrough in TMS occur?

While scientists may have understood the impact of electric currents on the brain as far back as the Rococo period, researchers still don’t fully understand how things like TMS influence the neurological system on a molecular level. As scientists continue to study the body’s complex neurological systems, breakthroughs in TMS will naturally follow suit. Until then, TMS is a promising, effective, and noninvasive treatment option for severe clinical depression. The use of TMS has saved countless lives and continues to offer relief for patients and their loved ones. 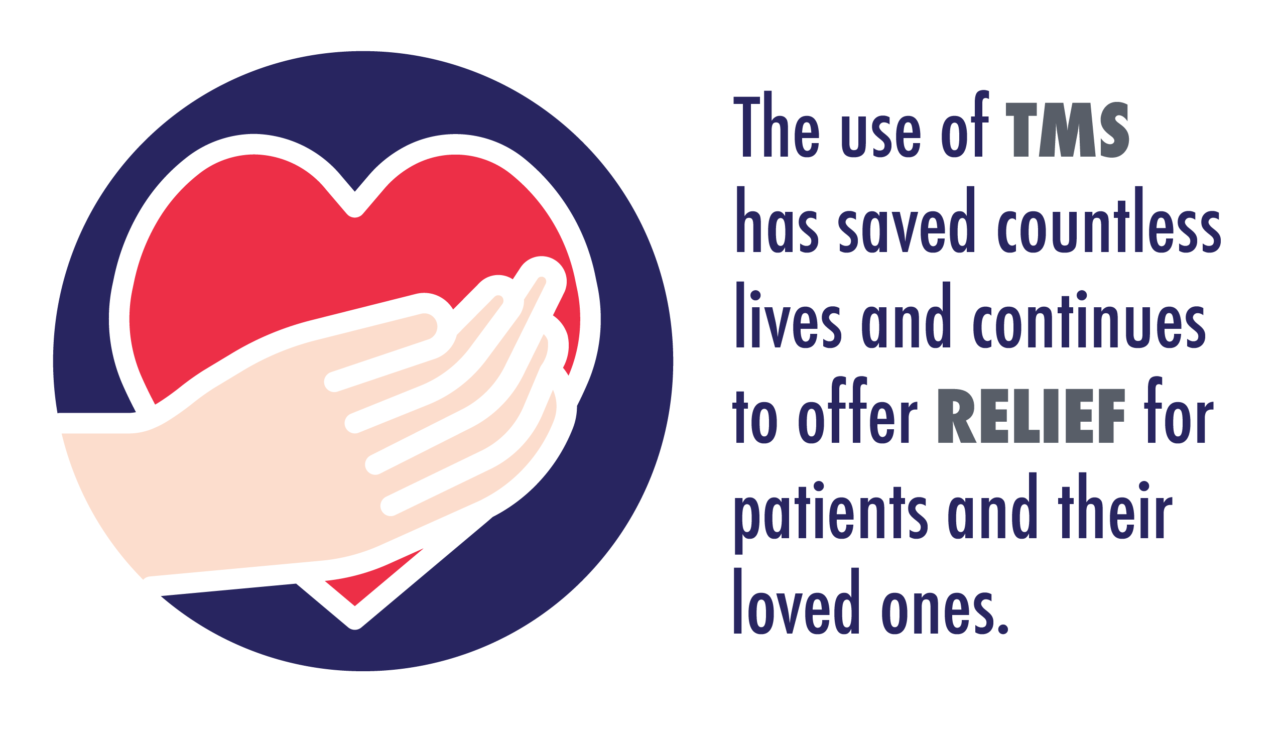